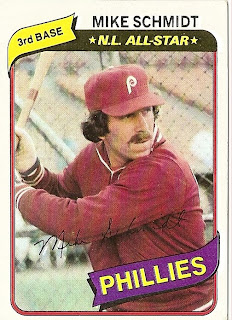 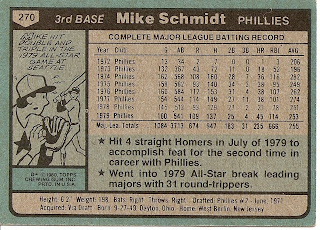 Who is this player?
Mike Schmidt, third baseman, Philadelphia Phillies
Hall of Fame, 1995
Quite simply, Mike Schmidt owned the 1980 season. The two are synonymous. In leading the Philadelphia Phillies to their first World Championship, Schmidt clubbed a career high 48 home runs, the most ever for a third baseman. He authored the season's most crucial home run when his 11th-inning blast essentially clinched the division on the second-to-last day of the year. Schmidt followed that with an MVP performance in the World Series, batting .381 with two home runs and seven RBI. He was the unanimous selection for league MVP, the leader in several categories. He was also named a Gold Glove winner. At the moment this card fell into the hands of this nine-year old, there weren't many players better.

Mike Schmidt's Hall of Fame biography describes him as "(a)n unprecedented combination of power and defense." Never has one sentence been so accurate yet so understated. Today, it is a given that a third baseman will provide both power and stellar defense. Schmidt's performance throughout the his 18-year career went a long way into cementing that perception. He was one of the most prolific sluggers of his era, leading all players in home runs during the 1980s.

The Dayton, Ohio native played in the College World Series in 1970 and was selected by the Phillies in 1971. He made his major league debut late in the 1972 season but success did not come easily for Schmidt. He struggled throughout the 1973, batting .196 and striking out 136 times. Mike had a breakout season the following year and led the NL in home runs the first of eight times. His rise coincided with the Phillies dominance in the National League East as Philadelphia won the division three years in a row (1976-1978). During that era, Schmidt hit four home runs in a game at Chicago but was often a target of the harsh Philadelphia fans.

During the 1980s, Schmidt led the Phillies to the World Series twice and won three MVP awards. In 1983, in celebration of the team's 100th anniversary, Schmidt was voted by fans the greatest player in the history of the franchise. He was moved to first base for most of the 1985 season but returned to third in 1986 and won his final MVP award. A torn rotator cuff caused him to miss most of the 1988 season and when he was unable to return, he announced his retirement in May of 1989. In tribute, fan still voted him to start the All-Star game that July.

Schmidt helped broadcast the 1989 NLCS for NBC and he also broadcast for the Phillies. When he was inducted into the Hall of Fame in 1995, he garnered the 4th highest percentage of the vote (96.52%). He was also honored by the team by having his number retired and a statue erected in his honor at Citizen's Bank Park. Lately, he has been very vocal in support of Pete Rose's Hall of Fame candidacy and is involved in several charitable endeavors. He served as third base coach for Team USA in the 2009 World Baseball Classic and even managed in the Phillies minor league system.

Why I love this card
It's Mike Schmidt. It was 1980. If you didn't freak out when you got this card you either didn't like baseball or didn't have a pulse. Or maybe a girl (sorry, that was during my 'you have cooties' phase).

Something else....
I can't find it on the web, but if you can somehow find the Christmas episode of "Always Sunny in Philadelphia" who will know why it is mentioned in a Schmidt post. Hilarious. On June 10, 1974, Schmidt hit a pitch into a public address speaker suspended 117 feet above and 329 feet away from home plate in the Astrodome. The ball then fell to the field, where, by the Astrodome's ground rules, it remained in play. Since he had already started his slow home run trot, he was held to a single - the only 500 foot single in history. 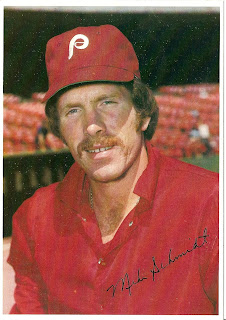 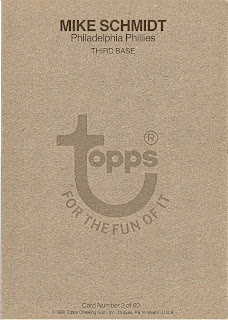 On this date in 1980:
Schmidt was 2 for 5 with 4 RBI as the Phillies defeated the Atlanta Braves 10 to 5 at Veterans Stadium. Schmidt had a double and his first triple of the season.
Posted by Dean Family at 8:42 PM