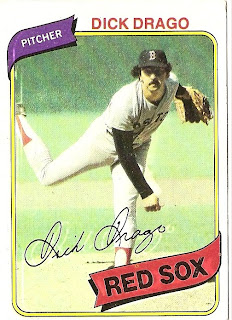 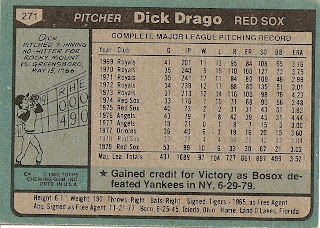 Who is this player?
Dick Drago, relief pitcher, Boston Red Sox
As the 1980 season began, Drago was poised to be the top fireman out of the Red Sox bullpen. He surrendered a game-winning grand slam to the Brewers' Sixto Lezcano on Opening Day, setting the tone for a frustrating season. With his ERA hovering around 5.00 at the All-Star break, he was replaced as Red Sox closer with Bob Stanley. Drago was moved into the starting rotation near the end of the season and he won his first three decisions. He finished the year 7-7, with 3 saves and a 4.14 ERA.

A Detroit Tiger fan growing up in Toledo, Ohio, Dick Drago lettered in three high school sports and earned a baseball scholarship to the University of Detroit. After his freshman year, he was signed by the Detroit Tigers as an amateur free agent in 1964. He slowly worked his way through the minor league chain and was considered a strong prospect as the decade came to a close. However, his career path changed when he was selected by the Kansas City Royals in the 1968 expansion draft.

With the Royals, he became the team's first ace pitcher. He won 11 games in Kansas City's inaugural season, leading the team with 10 complete games. His best season as a Royal came in 1971 when he won 17 games and earned minor Cy Young consideration. He crafted a 2.98 ERA, tossed four shutouts and had 15 complete games. When Jack McKeon took over as manager in 1974, it effected Drago's performance and he had the worst season of his career. He was traded to the Boston Red Sox in October of 1973.

His first year in Boston, he was used as a swingman but was markedly more effective in relief. This performance moved him to the bullpen full time for 1975 and he helped lead the Red Sox to the American League Championship. Largely unheralded Drago saved 15 games that season and two more in Boston's ALCS sweep over the Oakland A's. He lost Game 2 of the World Series, but his three scoreless innings in the famous Game Six allowed Boston to get back in the game. Unfortunately, the Red Sox would lose the World Series and Drago would never again get a crack at the postseason.

He moved to the Angels in 1976 and the Baltimore Orioles in 1977 before returning to Beantown as a free agent prior to the 1978 season. He spent the next three years on teams that were never quite good enough to get into the postseason, including the famous 1978 collapse. During these three years he appeared in 133 games, primarily in relief, saving 23. Just before the 1981 season began, Drago was dealt to the Seattle Mariners for Manny Sarmiento. The deal upset Drago, who blasted the Red Sox for not releasing him so he could become a free agent. He pitched poorly with the Mariners, the final year of his 13-year big league career.

Drago struggled away from the diamond as well. Shortly after his retirement he had serious tax and financial issues. He was arrested in 1992 and faced charges of failure to pay child support. Despite claims that he was being made an example of because he was a former ballplayer, he posted bond and was released. A settlement was reached and he returned to his home in Florida. Today, like most of us, Drago apparently has a Facebook page. He seems to really like Mafia Wars.

Why I love this card
I will refrain from the obvious immature, juvenile remarks when it comes to this particular card. However, Johnny Rashid, Ricky Carnaghi and Tom Benvenuti, wherever you are....thank you for aiding to my delinquency by teaching me about the beauty of double entendre.

Something else....
Drago allowed Henry Aaron's 755th and final home run. He was also quite the accomplished bowler. He holds a sanctioned 700 series and his highest sanctioned game was a 279. He still competes in charity tournaments, typically sanctioned throuhg MLB Alumni.

On this date in 1980:
Drago pitched 3.1 scoreless innings against the Texas Rangers earning the victory in Boston's 7-4 triumph at Arlington Stadium.
Posted by Dean Family at 10:00 PM