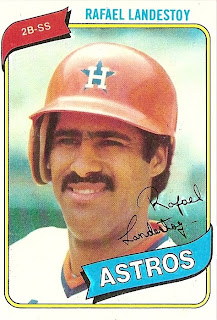 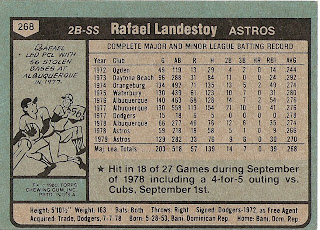 Who is this player?
Rafael Landestoy, reserve infielder, Houston Astros
It really isn't fair to classify Rafael Landestoy as a reserve infielder for the 1980 NL West Champions, as he appeared in 149 games. Often spelling Joe Morgan at second and Craig Reynolds at shortstop, Landestoy often provided a steady and reliable glove. Never really an offensive threat, Landestoy achieved career highs in many offensive categories in 1980 and appeared in all five game of the classic 1980 NLCS against the Phillies. Although his clutch hit kept a rally going for Houston in Game 5, Landestoy's replacement of Joe Morgan helped convince the future Hall of Famer that he could not get along with manager Bill Virdon and Morgan left the club after the season.

Rafael Landestoy made his major league debut in 1977 as a member of the Los Angeles Dodgers. He had shown promise in his minor league career, leading leagues in double plays and stolen bases. He appeared in the World Series that season, but he was unlikely to break the Dodger lineup with their historic infield of the 1970s. Landestoy was traded to the Houston Astros along with Jeff Leonard for catcher Joe Ferguson in July 1978.

He earned the only regular playing time of his career in Houston, appearing as the starting second baseman for the Astros in 1979. He batted .270 in 129 games as the Astros seriously challenged for the NL West for the first time. He lost his position when Houston signed Joe Morgan to provide veteran leadership. When Morgan left, Landestoy reclaimed his position, but he struggled mightily, batting .149 and was traded to the Cincinnati Reds.

For the final four seasons of his eight year career, Landestoy played for three teams (Houston, Cincinnati, Los Angeles) and batted only .172 during that span. He was almost exclusively used as a defensive replacement, occasionally receiving a opportunity to pinch-hit. He was a member of the 1983 NL West Champion Dodgers and had two plate appearances in that series. Landestoy appeared in his final major league game in 1984.

Landestoy was a manager in the San Francisco Giants and New York Mets systems and was a first base coach for the Montreal Expos from 1989-1991. He played in the Senior Professional Baseball League and returned to his native Dominican Republic to manage the Licey Tigers, where he won a pennant in 2005-06.

Why I love this card
The helmet. This was an era where the ear flaps shown were not customary. Think about it: Willie Stargell, Reggie Jackson, Johnny Bench, Rod Carew, Pete Rose - none of them had the ear flaps. They wore the old style and it seemed for a time that you could not be a star player wearing a helmet like the one shown here. Add to the impression that these made you look like the Great Gazoo and you could see why a kid would think these were strange.

Something else....
One of the followers of this blog pointed out a while ago that the write ups on the backs of these cards almost never mention the 1979 season, but something that happened in 1978. Here it is again with the Landestoy card and it was on the Schatzeder card too. I wonder how far in advance Topps had the backs of these cards planned out?

On this date in 1980:
Although, they manage only two hits, Rick Wise and the San Diego Padres edge Ray Burris and the New York Mets 1-0. Ellis Valentine's single in the bottom of the ninth wins the game for the Montreal Expos 4-3 over the San Francisco Giants. Future Hall of Famers Andre Dawson, Mike Schmidt and Reggie Jackson all homer, Phil Neikro and Bruce Sutter each earn victories.
Posted by Dean Family at 9:17 PM