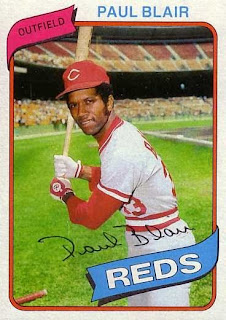 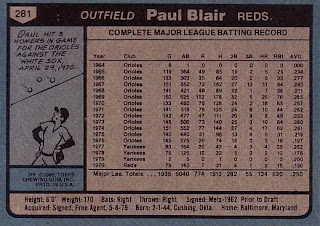 Who is this player?
Paul Blair, reserve outfielder, Cincinnati Reds
As the 1980 began, Paul Blair's career seemed to be over. Released by the Cincinnati Reds, Blair had accepted a position as a roving hitting instructor and scout with the New York Yankees. When the Yankees began the season with several injuries to their outfielders, the 36-year old Blair was signed to a one-year deal and activated to the major league roster. It was strictly a stop-gap measure as Blair appeared in only 12 games, mainly as a pinch-runner and defensive replacement. It was the last action Blair would see in his 17-year career and he returned to his previous positions within the organization.

Considered to be one of the best defensive centerfielders of all-time, Paul Blair is an eight-time Gold Glove winner was who also a clutch hitter and four time World Champion. He began his professional career in 1961 as a member of the New York Mets system. The Mets left him unprotected the following year and he was drafted by the Baltimore Orioles, the team he would become most closely associated. Paul appeared as a pinch-runner in his major league debut in 1964 and appeared in eight games during his brief trial.

Before the 1965 season, Blair completed a six-month tour of duty with the Army Reserve at Fort Jackson, South Carolina, as a communications specialist. He earned the centerfielder's job in Spring Training and would remain there for the Orioles for the next 13 years. He helped lead the Baltimore to the World Series four times, winning twice (in 1966 and 1970). He had the game-winning home run in Game 3 of the 1966 Series win, and batted .474 in 1970 as the Orioles again took home the crown. Blair's combination of speed, defense and timely hitting made him one of the league's most dangerous players in his prime and he was a favorite of teammates, peers and fans.

Nicknamed "Motormouth," Blair was severely beaned in the skull in 1970 and eventually had to undergo hypnosis to restore confidence in his ability to avoid inside pitches. In January 1977, he was traded to the New York Yankees were he was essentially a reserve. A famous moment came early in the 1977 season when Billy Martin famously pulled Reggie Jackson mid-inning for loafing in a game in Boston. Blair was the one sent in for Reggie. Paul played in all six games of the 1978 World Series, batting .375. He was released early in the 1979 season and caught on with the Cincinnati Reds, where he batted only .150 in 75 games.

Blair was named head baseball coach of Fordham University in 1982 and later coached at the major league level with the Hosuton Astros. Paul also devoted his time to high school coaching, operating a baseball camp, and working as a sports coordinator for a clothing firm. He was also the head baseball coach at Coppin State College from 1998 to 2002. Three days before Christmas in 2009, Blair suffered a heart attack, with 98% blockage in his coronary artery. He has made a full recovery and is enjoying retirement working out and bowling in Woodstock, Maryland.

Why I love this card
My mitt in Little League was a Paul Blair model. Problem was, I had no idea who Paul Blair was at the time. The other kids had a Steve Garvey, a George Brett, a Ken Griffey. I knew who those guys were instantly. When I looked into the palm of my mitt, Paul Blair's signature was staring back at me. When I finally got this card, I was relieved to find out that Blair was indeed a major leaguer and an exceptional one a that. If only my fielding was as good.

Something else....
I'll be honest. This is not my favorite Paul Blair card. This is: 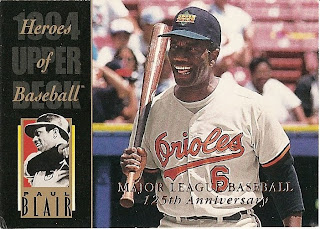 It is from the 1994 All Star Game that I was lucky enough to attend in Pittsburgh. The day before the game, they had the Upper Deck Heroes of Baseball game and Blair was the star. He hit a home run off of Hall of Famer Juan Marichal. He also scored from second on a single later in the game. He was interviewed on the field after that scoring play and uttered the now-famous line "I'm 'bout to die." The Three Rivers crowd cracked up and to this day, that's the first thing I think of when I think of Paul Blair. 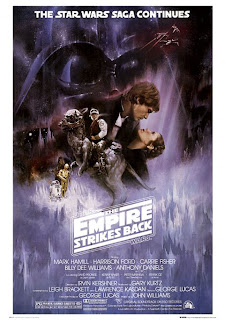 Next to these (and other) baseball cards, a major influence in my childhood was Star Wars. The Empire Strikes Back opened today in 1980. My Dad actually called me out of school so that we could see the 12 noon showing at the Eastland Twin in Harper Woods, MI. To know my Dad, you would have to know how extraordinary that is. He would never give permission to miss school yet he missed work to take me to the first showing.

In time, I would have Empire action figures, drinking glasses, posters, trading cards, a T-shirt, the works. We spent the summer wondering how Han Solo would get out of the carbonite and how cool Boba Fett was. I smile at those memories today and pause to reflect how quickly 30 years have passed.
Posted by Dean Family at 3:25 PM