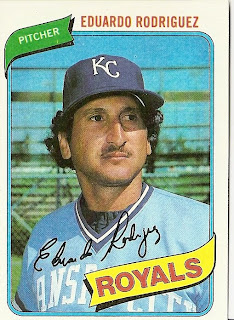 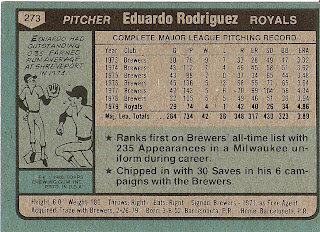 "Volanta," as he was known in baseball, the righthanded Rodriguez was originally from the Puerto Rico. As a youth, he was a high school star in baseball and volleyball and was one of the top pitchers in the tournaments of Antesalistas of Cataño and Athenian of Manatee. This earned the attention of major league scouts and he was signed by the Milwaukee Brewers as an amateur free agent in 1971.

He was called up to the Brewers in June of 1973 and pitched mostly out of the bullpen. Eduardo was one of only two pitchers on the team to post a winning record and he had the best ERA of all Brewer relievers that season. He also hit a triple in what would be the first and only plate appearance of his career, something that no player had ever done (it has since been done twice more). Despite splitting time between the bullpen and rotation, Rodriguez managed a winning record in six season in Milwaukee, while the Brewers never finished over .500 in that span.

Rodriguez was undefeated coming out of the bullpen in 1975 (7-0) and pitched very well for Milwaukee as a reliever. Yet Eduardo would periodically incur the wrath of managers and teammates for inexplicably changing his pitching style. He had a herky-jerky delivery reminiscent of Luis Tiant and coaches were forever attempting to streamline his delivery. This tendency earned him the derogatory nickname "Edweirdo" and is likely one of the reasons of his departure from Milwaukee. Another was that the Brewers never decided whether he was a full-time starter or reliever, which frustrated Rodriguez. He was traded to the Royals and spent one final season in Kansas City in 1979, going 4-1 with two saves.

Eduardo returned to his native Puerto Rico after his playing days. He had a heart attack and passed away on his birthday in 2009. He was 57 years old.

Why I love this card
The background in this photo jumped out at me then. The ramshackle bleachers and chain link fence in the background look similar to every little league or school field that I played at when I was a kid. I know now that this was likely taken during Spring Training but back then it reinforced the impression that major leaguers weren't all that much different than ordinary adults.

Something else....
Sad week with the passings of Ernie Harwell and Hall of Famer Robin Roberts and now noting the passing of Rodriguez in this post. That brings the total up to 13 so far featured in this set, roughly 5%.

On this date in 1980:
35 people were killed when the Sunshine Skyway bridge in Tampa, Florida collapsed. The accident involved a Greyhound bus, six cars and one pickup truck that plummeted from the bridge when it collapsed. Only one person who went over survived. But Wesley MacIntire, the driver of the pickup, died nine years later. The most famous photograph from the disaster shows a yellow Buick driven by Richard Hornbuckle of St. Petersburg stopped 14 inches short of the bridge's edge. Hornbuckle and his three passengers escaped. 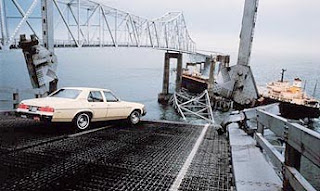