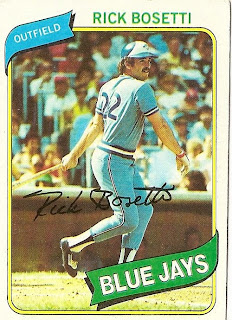 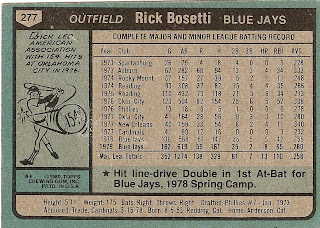 Who is this player?
Rick Bosetti, centerfielder, Toronto Blue Jays
As one of early stars in the infancy of the Toronto Blue Jays, Rick Bosetti was one of the team's more popular players. He began 1980 by expressing his dissatisfaction with the Toronto front office and then started the season mired in a dreadful slump. In June, he broke his arm when he was hit by a pitch from the Texas Rangers' Bob Babcock. Initially, Bosetti stayed in the game and ran the bases before the pain proved to be too great. The break was so serious a metal plate was inserted into Rick's forearm. Bosetti finished a very disappointing 1980 season batting .213 with only four home runs and 18 RBI over the course of 53 games.

Today, Rick Bosetti is largely remembered for his boast that he urinated in the outfield of every park in the American League. However, his talents as a ballplayer have been largely forgotten due to this boast and his relatively short career. The righthanded hitting Bosetti was drafted as a third baseman by the Philadelphia Phillies in 1973. However, his path to the majors was blocked by Mike Schmidt, and he was converted into an outfielder. He appeared in a handful of games for the Phillies in 1976 and was traded to the St. Louis Cardinals prior to the 1977 season.

Rick had a small amount of playing time in St. Louis and was on the move again, this time to the Blue Jays for 1978. It was in Toronto where he had the finest seasons of his career, establishing a reputation for smooth fielding and a solid bat. Rick led all American League outfielders in putouts in 1978 and 1979. He played in all 162 games in 1979 while also leading all outfielders in assists. Rick was a consistent hitter, compiling batting averages of .259 and .260 in 1978-79 while leading the team in RBI.

His dust-ups with management resulted in a trade to Oakland in 1981 and Rick was never again a major league regular. He played in only 15 games over two seasons in Oakland and retired in 1982 after seven big league campaigns. Rick returned to his native Redding, California and became involved in politics. He served ten years as a Redding Planning Commissioner, eight years on the Mercy Hospital Advisory Board and nine years on the St. Joseph's School Board. Rick currently serves on the Advisory Board for the College of Engineering at CSU Chico, and in May 2006, he took over as Head Coach for the Simpson University baseball team.

Why I love this card
After learning about the urinating thing, I think I like this card more now than I did then.

Something else....
I love the 1980 Topps Super Set. It is like the All-Star Game, every team needs to be represented. Bosetti is the Blue Jays rep here. 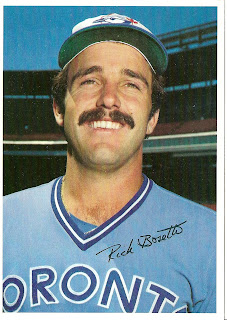 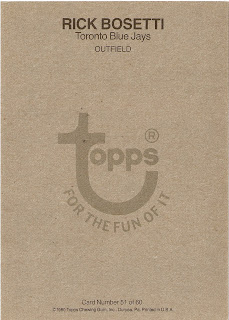 On this date in 1980:
A massive tornado hit the city of Kalamazoo, Michigan. When the storm passed, five people were dead, 70 were injured and $50 million was the damage estimate.
Posted by Dean Family at 10:18 PM