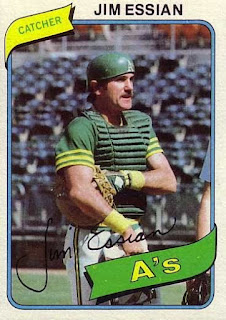 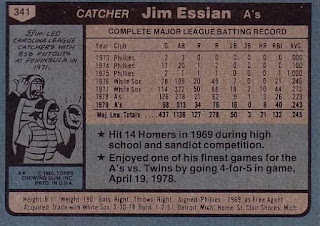 Who is this player?
Jim Essian, catcher, Oakland A's
As the 1980 season unfolded, Jim Essian was part of a baseball resurgence in Oakland. The A's surprised the critics by winning 29 more games over their disastrous 1979 campaign. Led by new manager Billy Martin, "Billyball" captivated the fans and turned the A's into winners. Essian was a part of that effort as part of a platoon system of catchers with Mike Heath and Jeff Newman. Essian started the most games behind the plate as he was the best defensive receiver. That November, Jim signed a one-million dollar contract to become the starting catcher for the Chicago White Sox in 1981.

A product of the eastside sandlots of Detroit, Jim Essian was a prep star at St. Martin of Tours. A two-sport athlete, he led his high school basketball team to the state championship in 1969 and was named an all-state player. However, when the Philadelphia Phillies offered him a contract, he began his career in baseball. Working his way up the minor league ladder, he was named to three All Star teams and established his reputation as an excellent defensive catcher. Jim made his major league debut late in the 1973 season.

In Philadelphia, his path to a full-time spot was essentially blocked by Bob Boone and he only appeared in 21 major league games over the course of three seasons. Subsequently, he was traded twice in May of 1975, first to the Atlanta Braves and then to the Chicago White Sox less than a week later. It was in Chicago that Essian settled in as backup catcher and had a strong season with the 1977 South Side Hit Men team, batting .273 in 114 games and smashing 10 home runs. The good vibes did not last long in Chi Town as the Hit Men were quickly disassembled and Essian was traded to the Oakland A's prior to the 1978 season.

With Oakland, Essian saw the fall of the A's Dynasty first hand, as Oakland fell to the cellar of the AL West. Essian even reported calling the A's front office during the off-season to find the number disconnected. There were some bright moments, such as the time Essian hit an inside-the-park grand slam against the Toronto Blue Jays.

After signing his million dollar contract, Essian was to be the starting catcher upon his return to the Chicago White Sox. However, when Carlton Fisk became an unexpectedly available free agent, the Pale Hose threw their hat into the ring and landed the prize. This transaction moved Jim to the bench and he only spent one year in Chicago before being traded again, this time to the Seattle Mariners. Jim would play three more season in Seattle, Cleveland and returning to Oakland before his 12 year career ended in 1984.

Jim became a minor league player-manager in 1985 and became a full-time manager the following year. Taking a page from the "Billyball" philosophy, Essian's teams were aggressive on the base paths and had strong pitching. He was rewarded with the Cubs' managerial position in 1991, taking over for the fired Don Zimmer. He only managed that season at the major league level before returning to the minor leagues. More recently, Essian has led the Greek National Team as their manager.

Why I love this card
During the time I was collecting these cards, I devoured every bit of information that they contained. It was earth shattering to learn that Essian resided in my home town at the time of St. Clair Shores, Michigan. To think that a major leaguer lived in my town was mind blowing. I could run into him at the 7-11! The grocery store! The little league field! The possibilities were endless. Of course, none of that happened, but to think that it realistically could personalized the game that much more.

Something else....
Absolutely love the A's logo on Essian's helmet. In those days, the catcher's gear wasn't a sophisticated as today and more often than not, players had a batting helmet turned around. To have the logo on the front (or back) was a precursor to the multiple designs on the hockey-style catching mask of today.