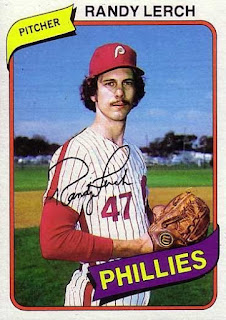 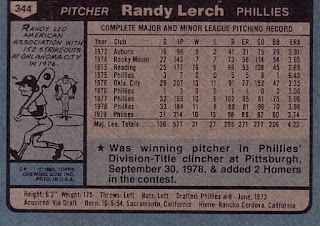 Who is this player?
Randy Lerch, starting pitcher, Philadelphia Phillies
Coming into the 1980 season, the Phillies were looking to Randy Lerch to fill in the back end of their starting rotation. The 25-year old lefthander was roughed up in his first start of the season against the St. Louis Cardinals and he was never able to find a groove as the Phillies made a run towards their first world championship. He won only four of 22 starts in 1980 and by August he was removed from the starting rotation. Now in the bullpen, Lerch was still inconsistent and the Phillies picked up Sparky Lyle to fortify the bullpen down the stretch. As a result, Lerch was left off the postseason roster in favor of Kevin Saucier. Despite being part of a team that would be champions, by the end of 1980, Lerch was subject to trade rumors and prescription allegations.

At one time, Randy Lerch was thought to be a pitcher in the mold to teammate Steve Carlton. Philadelphia selected the California native in the 1973 amatuer draft and he won 16 games two years later at Double-A Reading. After notching another 13 wins and leading Triple-A in strikeouts, Randy made his major league debut at the end of the 1976 season. As the 1977 campaign got underway, Lerch won a spot in the Phillies starting rotation and was part of two National League East championship teams (1977 & 1978).

Perhaps Lerch's most memorable moment came on September 30, 1978 (depicted on his 1980 card). In a wild game during a wild pennant chase, Lerch was the starter for the Phillies and clubbed two home runs in a 10-8 win over the Pittsburgh Pirates. The clincher came on the second to last day of the season in a nail biting finish that has been overshadowed by the Red Sox-Yankees drama the same season.

After the 1980 World Series, Lerch and several of his teammates were subpoenaed to testify at a hearing against a doctor charged with illegally prescribing drugs. Lerch admitted that he had twice received amphetamine tablets, while many of his teammates denied such activity. Perhaps coincidentally, Lerch was traded to the Milwaukee Brewers shortly before Spring Training.

In Milwaukee, Randy benefited from a change of scenery and helped the Brewers win the AL East partial pennant in 1981. Unfortunately, Lerch missed out on a return to the postseason (and World Series) when he was sold to the Montreal Expos in August 1982. Randy became almost exclusively a reliever in the latter part of this career with the Expos and San Francisco Giants. He spent two seasons in the minor leagues earning his way back and returned to the Phillies for four appearances in 1986. He was released after posting a 7.88 ERA and his 11 year major league career came to a close.

In 2000, Randy Lerch was inducted into the Reading Baseball Hall of Fame. Today, Randy and his family reside in New Jersey.

Why I love this card
Again, gotta go with the cartoon on the back. Something about making a bat into Swiss cheese with a fastball is very cool. That and the fact that the Spring Training photos always made it look like Topps took these pictures at my little league field.

Something else.....
In July 1979, Lerch was injured in a scuffle with three youths when a group harrassed his wife. He broke a bone in his right (non-pitching) hand. It would probably explain why he had a 7.00 ERA during the month of July.