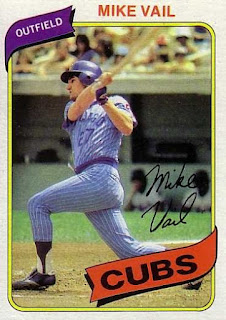 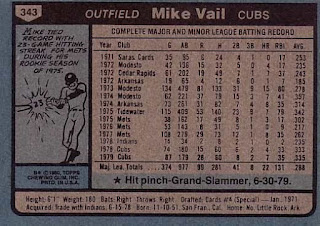 Who is this player?
Mike Vail, rightfielder, Chicago Cubs

As the season began, Mike Vail was the fourth outfielder and occasional pinch-hitter for the Chicago Cubs. While he did provide a solid bat against left-handed pitching, he was not expected to be a major contributor to the Chicago cause. However, when Dave Kingman was injured and had personal problems in the early part of the season, Vail stepped and batted .382 in May and drove in 13 runs. When Kingman returned, Vail moved over to right field, where he played the majority of the season. Though his bat cooled over the long haul, he finished the season with a .298 average and achieved career highs in nearly every offensive category.

A product of Archbishop Mitty High School in San Jose, California, the righthanded hitting Vail was originally drafted by the St. Louis Cardinals in 1971 amateur draft. While in the Cardinals' system, Vail had a career-changing experience under the tutelage of Hall of Famer Joe "Ducky" Medwick. Medwick was a minor league instructor and taught Vail to hit the ball to all fields. When Vail was traded to the Mets, it was Medwick who correctly predicted that he would have a better opportunity to make the major leagues with New York.

Vail dominated in the International League, being named MVP and leading the loop in batting. This lead to his promotion to the parent club and Mike made his debut on August 18, 1975. He laced a single in his first at-bat and it was a harbinger of things to come. Vail would go on to set a major league record for rookies (since broken) by hitting safely in 23 straight games. Being in the glare of New York City, Vail became popular with fans and touted as a "future star."

It has been speculated that Vail's performance in the late summer of 1975 prompted the Mets to trade the popular veteran Rusty Staub to make room for him. However, he was unable to do so when he dislocated a bone in his right foot playing basketball during the off-season. He returned to soon and out of shape and the magic was gone. He would last only one more season in New York and was sold to the Cleveland Indians in 1978.

By mid-season he was traded again, to the Cubs and Vail would spend three years in Chicago. Manager Herman Franks was critical of him (and others) when he resigned in 1979, despite the fact that he batted .317 in his time on the North Side. After leaving Chicago, he spent four seasons with four teams (Reds, Expos, Giants and Dodgers), being used primarily as a reserve and pinch-hitting specialist. He retired after the 1984 season and 10 big league seasons.

Today, he lives in the Las Vegas area. I wonder if he still breeds Persian cats?

Why I love this card
Here's another plug for the cartoon on the back. Not only does it mention the hit steak (as did many of Vail's cards), the "23" exploding off the bat is very consistent with the comic books which were also very popular in the 10-year old circle. For example: 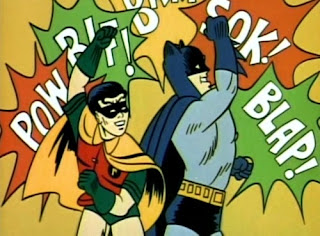 Something else.....
Using the theme from the previous post, I attempted to determine when the photo on Vail's card was taken. First, it is clear that this shot was taken at the site of Vail's former glory, Shea Stadium. Next, I had to make a pretty big assumption, that this photo was not taken in 1978, as Vail played for them in 1978. There is an outside chance that this game could have been played July 7, 1978 as Vail did appear at Shea in a day game.

Therefore, assuming that it was taken in 1979, Vail played in two day games at Shea that year; Saturday, July 28th and Sunday, July 29th. The Sunday contest was called in the seventh inning due to rain. Vail's card appears to be in the sunshine. Vail popped out to catcher, grounded out to third and walked in that game. Here he appears to be following a drive in the air.

Therefore will go with Saturday, July 28, 1979 as the date of the game Vail is pictured in here. We'll say the rationale is that there doesn't appear to be a threat of rain and Vail is following one of his two fly outs that day.
Posted by Dean Family at 9:32 PM