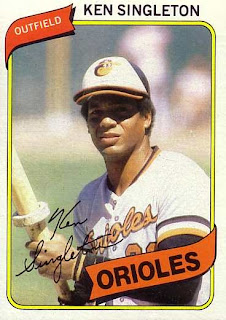 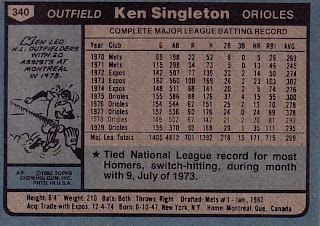 Who is this player?
Ken Singleton, right fielder, Baltimore Orioles
The 33-year old Singleton was in the midst of putting together a very solid season during the summer of 1980. In helping lead the O's to 100 victories in the tough AL East, Singleton was an anchor in the middle of the Baltimore lineup. He drove in more than 100 teammates for the second straight season and saw his season average finish at .304. His penchant for clutch performance saw him lead the league with 19 game winning hits in 1980.

Almost from birth, it seemed as if Ken Singleton was destined for a future in major league baseball. Growing up in Mount Vernon, New York, Ken grew up in a home once owned by former Brooklyn Dodger Ralph Branca. A lefty by birth, Singleton learned to switch hit as a youngster by emulating his favorite player, Willie Mays. In high school, his switch-hitting ability enabled him to star at the prep level and he went on to play both baseball and basketball at Hofstra University. The New York Mets made him their #1 selection in January 1967 with a $10,000 signing bonus.

Singelton quickly established himself as one of the Mets' top prospects, and after three years of climbing the ladder, made his major league debut on June 24, 1970. The following season, he received valuable tips to improve his slugging from Hall of Famer Ralph Kiner in the fall Instructional League. His improvement made him one of the crown jewels of the Mets' farm system and he was the key prospect traded to the Montreal Expos for Rusty Staub in 1972.

As an everyday player in Montreal, the switch-hitting Singleton quickly became the Expos' best player. He led the team in hits in two of his three seasons in Montreal and established a club record in runs and RBI in 1973 (since broken). A durable player, Singleton led the National League in on-base percentage during his '73 campaign (.425). Despite his fine performance and emergence as a fan favorite, the Expos traded Ken to the Baltimore Orioles after the 1974 season. It was in Baltimore that Singleton would establish his most lasting impression on the minds of most baseball fans.

In his first season in Baltimore, Singleton set a club record with 118 walks and was named Most Valuable Oriole by his teammates (an award he would win twice more). Two years later, he was selected to his first All Star Game in a season that saw him bat .328 and finish third in the MVP voting. In 1979, Ken helped lead the O's to the World Series with perhaps in most impressive statistical season, hitting 35 home runs and batting .295. At the time, his 35 home runs was the second-most in history for a switch batter. This led Ken to being named runner-up to American League MVP Don Baylor.

Ken was rewarded for his quiet consistency in 1981 by being named to start the All Star Game in Cleveland. As the elder statesmen of the early 1980s Orioles, Ken helped mentor future Hall of Famers Eddie Murray and Cal Ripken and lead them to the 1983 World Series championship. His fifteen year career ended when Ken retired after the 1984 season.

Singleton transitioned into the broadcast booth even before his playing days ended, working at WBAL television in Baltimore. Later, he commentated for two of his former teams the Orioles and later the Expos. Today, Ken is an analyst for the YES network on New York Yankee broadcasts. He has held that position since 1997 and established just as good a reputation as an announcer as he had as a player.

Why I love this card
Ballplayers simply do not wear their caps under their batting helmets anymore. In fact, most helmets didn't even protect the ear as they do today. During this era, several players like Singelton here, sported the look and with our plastic replica batting helmets, we emulated our heroes. That and wearing the hat softened the blow when someone would push a helmet down on your head. Those four little spikes that kept the headband in place hurt like hell sometimes.

Something else....
Each year, Singleton helps organize a golf tournament for the Cool Kids Campaign, a foundation established in memory of Ken's Orioles' teammate Mark Belanger. The foundation helps raise money for kids and families stuggling with cancer.
Posted by Dean Family at 10:05 PM