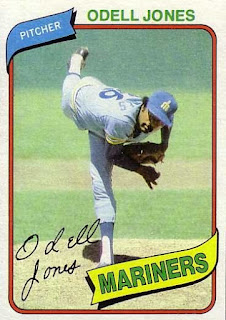 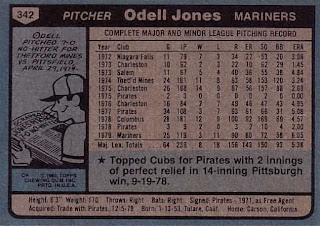 Who is this player?
Odell Jones, starting pitcher, Seattle Mariners
After an erratic 1979 season in the Mariners starting rotation, Odell Jones was looking for a spot on Seattle's pitching staff as Spring Training 1980 opened. After some impressive outings, Jones was traded to the Pittsburgh Pirates on the final day of camp. He did not appear in a major league game for the defending world champions, but the hard throwing righthander did pitch well enough at Triple-A Spokane to earn consideration for a spot in 1981.

A graduate of Compton High School in 1972, Odell Jones was selected by the Pittsburgh Pirates as an amateur free agent. The fireballer first garnered attention in 1974 when he pitched a no-hitter at the Double-A level and again the following season when he was named an International League All-Star. Jones led the IL in victories and strikeouts and earned a shot with the parent club, making his major league debut on September 11, 1975.

Jones made the Pirates pitching staff in 1977, splitting his time between starting and relieving. However, his high ERA (5.08) and an abundance of veterans prevented him from staying in the Steel City and eventually led to his trade to the Mariners after the 1978 season. Upon his arrival in Seattle, Odell was counted on to be the fourth starter. After a decent first month, Jones stuggled, allowing four or more runs in eight of his next nine starts. He was relegated to the bullpen for the last two months of the season and eventually was not part of the Mariners plans.

After spending the first half of 1981 in the minor leagues and again leading the International League in strikeouts, the Pirates brought Jones up after the Player's Strike. He was consistent as both a starter and reliever, but his performance did not guarantee him a return in 1982. From there, he spent the 1983 and 1984 seasons in Texas and the 1986 season in Baltimore. Pitching almost exclusively in relief, Jones pitched well, posting a consistent ERA (3.09 to 3.83). He even notched 10 saves for the Rangers in 1983. Curiously, though it did not ensure a spot on a major league staff as he spent the 1982, 1985 and 1987 entirely in the minor leagues.

He earned a spot as a reliever with the Brewers in 1988, Jones took advantage of an opportunity when Milwaukee ace Teddy Higuera was hurt. With short notice, he pitched 8 1/3 no-hit innings against the Cleveland Indians. He was a perfect 5-0 with the Brewers, but again, it did not guarantee a continued spot on a major league staff. His 9 year major league career would come to an end.

But not his professional experience. He played in the Senior League in 1989 and 1990 and as late as 1992 was still pitching in the minor leagues, this time the Edmonton Trappers at the age of 39.

Why I love this card
One of the games that we used to play would be copying certain players stances, quirks and mannerisms. Often that would require replicating what we saw on the cards. Jones' form here, I am certain, was never copied as I can't imagine any of us being able to stand on one leg that long for us to guess.

Something else....
I love cards with real game action shots. This card is obviously one of those. I used to like to try to guess where the games were played, against whom, etc. I am fairly certain that this game was in Oakland and through the magic of Retrosheet, am able to determine that this game was likely played Saturday, July 28, 1979. Even if it wasn't, I'm going to tell myself that it was.
Posted by Dean Family at 9:18 PM