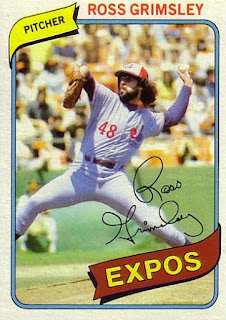 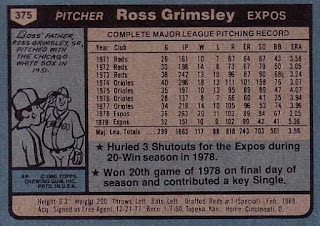 Who is this player?
Ross Grimsley, starting pitcher, Montreal Expos

Just 18 months after becoming the first 20-game winner in the history of the franchise, Ross Grimsley reported to camp angry at the way he was being used by manager Dick Williams. Still upset after the way he was used down the stretch in 1979, Grimsley made it known that he would rather be traded. He began the season as the Expos' fifth starter and often went long periods of time without being used in a game. Grimsley took to taping a number on his locker to indicate how many days he went being appearances, similar to the Iran Hostage Crisis. By the middle of June, he was moved out of the rotation, with a 2-4 record and 6.29 ERA. Ross did not do much better in the bullpen and within a month was traded to the Indians for what he called "a bag of bats and a couple boxes of Fruit Loops." Despite winning his first three decisions with the Tribe, Grimsley was hit hard and finished 1980 with a 6-9 record and a 6.59 ERA.

The son of a major leaguer with the same name, Ross Jr, was raised in Tennessee and drafted by the Cincinnati Reds in 1969. Despite his considerable talent, Grimsley became more well known as a metaphor for the flaky, unpredictable nature of left-handed pitchers during this era. To wit:

* One of the primary reasons for his trade from the Reds, perhaps the most conservative team of this era was due to his resistance of the team's strict grooming policies (Grimsley was traded to Baltimore after the 1972 season at age 23 despite being a major part of their rotation).

* While with the Reds, manager Sparky Anderson asked him to stop corresponding with a "witch" who was sending him good luck charms in the mail. Grimsley reportedly refused. He clarified this in a 2013 interview here.

* He was often accused of doctoring the ball, primarily throwing a spitball. Many sites on the net attribute Billy Martin as being a primary critic of Grimsley using grease from his hair to doctor the ball. While this accusation is out there (see the links) I have been unable to find a definitive source that cites Martin in 1977. If anyone can pass along, please let me know.

* With the Orioles in 1975, Grimsley, while warming up in the Orioles bullpen, responded to a Boston fan's heckling by throwing a ball into the right field bleachers. The ball passed through a protective netting, striking a fan. Grimsley was later sued over the issue.

The Indians sent him to the minors at the end of Spring Training 1981 and he did not appear in a major league game that season. He returned to the Orioles in 1982, where he finished his 11-year major league career.

Former Reds teammate Bill Plummer asked Ross to coach with him in the Seattle organization shortly thereafter. From there, he began a long second career as a widely respected pitching instructor and coach. He earned three World Championship rings with the Giants this decade as he was instrumental in the development of several of the Giants' pitchers such as Tim Lincecum, Matt Cain and Madison Bumgarner. Today, the longtime Baltimore resident provides analysis on the Orioles radio and television broadcasts.

Why I love this card.
Just look at it. Very few cards from this set look cooler. If I have to pick something else about it, however, I would say the cartoon on the back makes Ross Sr. look like King Kong Bundy.

Something else...
As much as I loved this card in 1980, Grimsley's 1981 card positively terrified me. I had not known at the time that his nickname was "Crazy Eyes" but I wouldn't have had to be told twice. This card was never, ever, at the top of any pile of cards I owned that season. 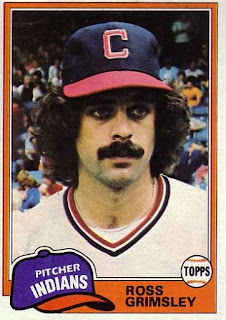