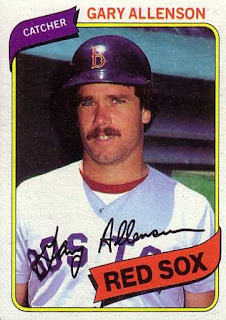 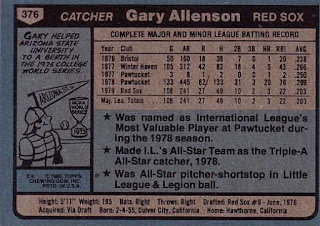 Who is this player?
Gary Allenson, catcher, Boston Red Sox

Despite starting 82 games behind the plate in 1979 (primarily due to injury to Carlton Fisk), Red Sox management was not high on Gary Allenson as 1980 began. Even though he was solid defensively behind the plate, the Red Sox were looking for more offense from Fisk's understudy. This, even though Allenson spent the off-season playing winter ball in  Santurce, Puerto Rico under Frank Robinson.  Near the end of Spring Training, Boston landed Dave Rader in a trade with the Philadelphia Phillies. With a healthy Fisk returning and veteran Rader batting .328, Allenson saw limited action in 1980, appearing in only 36 games. A highlight, however, game on June 25th against the rival Yankees, which saw Gary collect two hits and score the game winning run in the 10th inning.

The man known affectionately as "Muggsy" came to Boston via the campus of Arizona State University and helped lead Team USA to a Silver Medal in the 1975 Pan American Games. After he was named the 1978 International League MVP he debuted as a Red Sox rookie in 1979 where he received a baptism by fire due to Fisk's injury.

Fisk's departure from Boston (as well as Don Zimmer's) opened the door for Allenson to be the Red Sox Opening Day catcher in 1981. Coincidentally, the Red Sox played the Chicago White Sox on that day - the heralded return of Carlton Fisk. Allenson, however, showed his mettle before the home town fans, homering to give the Sox a short-lived lead:


Allenson would be Boston's starting catcher for the next three seasons. His defensive abilities were always praised by his teammates and he had a strong and accurate throwing arm. Eventually, however, a harder hitting Rich Gedman would replace him in the starting lineup. He stayed with the Red Sox for one more year and finished his 7-year major league career with the Toronto Blue Jays in 1985.

Since his playing days, Allenson, like so many of his contemporaries, stayed around the game as a manager and coach, first in the early 1990s with Boston, then with the Brewers, finally with the Orioles, where he last coached in the majors in 2010. In between, he has had a long career managing in the minors where he managed future All-Stars such as Jake Arrieta, Bobby Abreu, Matt Weiters and Brian Roberts. Today he is the manager of the Buffalo Bisons, the Triple-A affiliate of the Toronto Blue Jays.

Why I love this card
It reminds me of one of my favorite trades that summer. Like most kids, George Brett was huge for me in 1980. And, even though I already had a card of his, I couldn't resist when one was offered to me in a trade. However, my buddy Peter didn't feel that Brett straight up for Steve Garvey was fair so I had to pad the deal. One of the "players to be named later" was Allenson. I think it ended up being a 10 for 1 deal. I only remember Allenson's inclusion because Peter said his helmet reminded him of Dairy Queen.

Something else...
Since everything is recorded these days, Youtube has posted an ejection of Allenson's when he was a manager, in this case with the Norfolk Tide where he spent five seasons. And since those are always fun to watch....enjoy, this one is unique!!