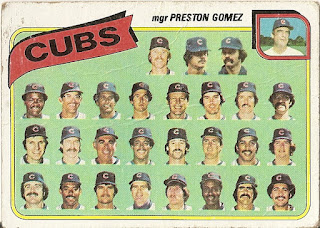 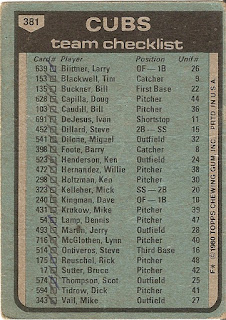 Not much was expected out of the Chicago Cubs and they didn't disappoint during the 1980 season. Or then again, maybe they did. Preston Gomez was named manager prior to the season and it would turn out to be the final managerial position of Gomez' career.

Like all Cub seasons 1980 began with the hope and promise of Opening Day. The Cubs had a decent April, even spending a little time in first place. Their bullpen was a strength as was Dave Kingman, who would win Player of the Month honors for April, batting .345, swatting 6 home runs and driving home 16 teammates. Jerry Martin also started the season hot, batting .368 for the month.

Briefly, some Cub highlights from April, what would be their only winning month of 1980:


May began optimistically, but reality began to set in, as did injuries and gaping holes in center field and third base. By mid-month, the Cubs had slipped to the .500 level with no realistic prospects of returning to the first division:

By summer, the Cubbies had lost 8 out of 9 and were sinking fast. Cliff Johnson was added to the roster and rookie like Jesus Figueroa were seeing more playing time. Third base was a revolving door as by this point in the season, five players had seen action at the hot corner. Dave Kingman was also banged up, injuring his shoulder in a home plate collision:


A highlight came in July as Dave Kingman was named to the NL starting lineup at the All Star Game in Los Angeles, and Bruce Sutter picked up the save in the National League's ninth straight victory. However, Kingman took to complaining about the press coverage he was receiving and Cub management decided that a change was needed and Preston Gomez was fired, replaced by coach Joe Amalfitano:


As the dog days of August rolled in, the Cubs found themselves 25 games under .500 by the end of the month. 1980 would wind up being the third worst season in club history to that point, as the Cubbies lost 98 games, finishing last, 27 games off the pace. At this point, in the season, the Cubs would take outs any way they could get them:


By the time September rolled around, the only thing left really for Cub fans was to see if Bill Buckner would win the National League batting crown. He came from behind to win the race, edging out the Cardinals' Keith Hernandez and Garry Templeton:


In the off-season, the Cubs made some moves to improve on their standing for 1981, obtaining third baseman Ken Reitz from the Cardinals in a trade. Reitz had started the All Star Game at third for the NL in 1980 and it was hoped he would bring stability to the position. Also coming from St. Louis was highly touted prospect Leon Durham. However, it cost the Cubs their closer Bruce Sutter.

In retrospect, trading a Hall of Famer away seemed like a poor move, but at the time it made sense. The Cubs finished last in fielding in 1980, 41 errors coming from their third basemen. And the Cubs only bright spot in 1980 was their bullpen. In addition to Sutter, Bill Caudill and Dick Tidrow had solid years. Willie Hernandez would be a future MVP and making his major league debut in 1980 was their closer of the future Lee Smith.

Why I love this card
The uniqueness of the floating heads made the Cubs different. Like no lights in Wrigley, their team card was one that always made you stop and look at it. Of the Cubs pictured on 1980 cards, only two (Miguel Dilone and Ken Holtzman) would not play for the Cubbies that year.

Something else...
The video clips above feature a couple of things that we will likely never see again: a game suspended by darkness and a July 4th doubleheader. The game has certainly changed.
Posted by Dean Family at 9:26 PM