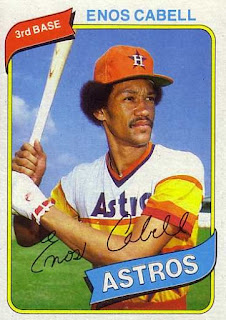 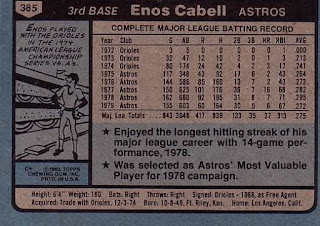 Who is this player?
Enos Cabell, third baseman, Houston Astros

As the Houston Astros were making their run to their first divisional championship, Enos Cabell was the team's everyday third baseman. By 1980, Cabell was pretty much a fixture in Houston and began the season as the sixth place hitter in the order. As the summer wore on and the Astros found themselves in a pennant race for the NL West flag, manager Bill Virdon moved Cabell to the second spot in the batting order. While he did provide a consistent bat in the lineup, Enos did lead all National League third basemen in errors, sometimes at crucial junctures. However, he often responded when his team needed him most, as he did during the one-game playoff for the division title against the Dodgers.


Much is already on the web in regards to Cabell's career. Two excellent articles can be found here  and here. There is even substantive coverage given to Cabell's brief appearance in "Bad News Bears in Breaking Training."

Rather than repeat what has already been documented, for this post we would include a couple of items surrounding Cabell that may not be as immediately apparent.

The first came on Friday, May 14, 1982. Cabell by this time had moved on to the Detroit Tigers and was playing regularly if not at a set position. On this evening, he was the Tigers' #2 hitter and third baseman. The Tigers and Minnesota Twins were involved in a very tense game that would see two bench clearing brawls, multiple ejections and a game-winning home run in the bottom of the 11th by Kirk Gibson. Cabell was was brushed back in the bottom of the 11th igniting the second brawl of the game that saw some wild haymakers by Larry Herndon, Sparky Anderson get knocked to the ground and Dave Rozema be stretchered out when he attempted to karate kick a Twin and his knee gave way. Luckily, footage of this brawl exists:

After Cabell left Detroit, his name would be among those accused in the Pittsburgh Drug Trials of 1985. Cabell testified that his usage decreased after being confronted by Anderson. To his credit, Cabell admitted his wrong doings, estimating that he used cocaine 100 times between 1978-1984 and saying through his testimony he was "embarrassed" and "figured it was time to pay"

In his retirement, Cabell has become a fixture in the Houston area working as a special assistant to the general manager since 2004. Also, he has worked  with the Joe Niekro Foundation. Neikro, Cabell's former teammate died of a brain aneurysm as  did Cabell's wife. The foundation's purpose to support patients and families effected, providing education, and also helping fund research. Here is a story that appeared with Cabell and Joe's daughter Natalie, who created the Foundation:

Why I love this card
The mesh backing of Cabell's hat. This was similar, if not exact, to the replica hats that you would by at the souvenir stands at the ballpark. Also, every Little League hat in existence had a mesh backing, along with the plastic adjustable straps. If you weren't careful and pulled that strap too hard, you might bust the tiny plastic tabs that would hold your hat in place. And then that would be a disaster that could ruin your whole season. To know that Cabell, just might, have the same problem? Made the major leagues that much more reachable.

Something else...
Cabell also had a card in the Burger King Pitch, Hit and Run set. A curious selection since Cabell had never appeared in an All Star Game or any of the "key" stats of the day. Maybe he was included for the "run" portion of the contest since he had 238 stolen bases in his 15-year career with the Orioles, Astros, Giants, Dodgers and Tigers.

The Cabell card is very similar to the 1980 base card with the exception that the photo is shifted a bit to the right to include a complete view of Cabell's hands on the bat. 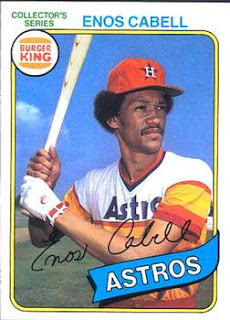 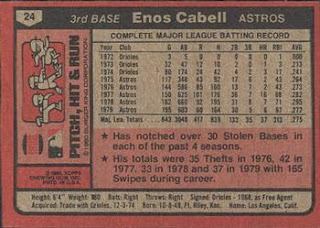