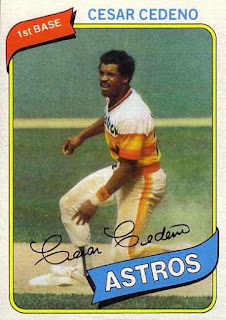 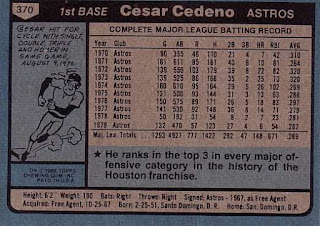 Who is this player?
Cesar Cedeno, first baseman, Houston Astros

While the position on this card indicates Cedeno is a first baseman, Cesar Cedeno began 1980 making sure that there would be no mistake that he is the Houston Astros’ centerfielder. Cesar spent the 1980 season in center helping the Astros to their first ever NL West Championship. Typically batting fourth or fifth, the right-handed hitting Cedeno finished fifth in his league in batting (.309), seventh in slugging percentage and eighth in stolen bases. In the middle of Game 3 of the NLCS against the Phillies, Cedeno fractured his ankle trying to beat out a double play. His injury, along with the absence of J.R. Richard, was instrumental in the Astros not reaching the World Series.

“He’ll end up with decent statistics, but statistics are for people who don't know anything. He's never been the same hitter since that incident.”

An unidentified teammate made that remark to Peter Gammons in 1977 and in many ways it unfortunately encapsulates the career of Cesar Cedeno. An excellent five-tool player scouted by the Astros at an early age, Cedeno earned comparisons to Roberto Clemente and Willie Mays. By the time Cesar was 25 years old, he was already a four-time All Star, a five time Gold Glove winner and a seemingly unlimited future.

As a young boy, it was Cesar's mother who encouraged him to play and even bought him his first glove growing up in Santo Domingo. He was discovered by the Astros at age 16 in 1967 and he quickly worked his way towards stardom. By 1973, he was universally acclaimed as one of the best young players in the league, if not the very best. It was at that point that fate intervened. For most fans of this era, what happened next is fairly well known. Alcohol, a handgun, a hotel room. Cedeno was involved in the accidental shooting death of a 19-year old girl, Altagaracia De La Cruz. The 22-year old Cedeno called police and then fled the scene, but turned himself in the next day, with the support of his father and his wife. He was charged with voluntary manslaughter and jailed for a time until his trial. The charge was later changed to involuntary manslaughter (of which he was found guilty) and paid a fine.

It remained a shadow that followed Cedeno, leading many to speculate it affected his play. While that remains speculation, the fact that the Astros changed the dimensions of the Astrodome in the mid-1970’s severely hampred his power numbers and his aggressive style of play and his temperament was the source of numerous injuries and some consternation. He nonetheless was often a fan favorite and was featured in the 1977 movie Bad News Bears in Breaking Training 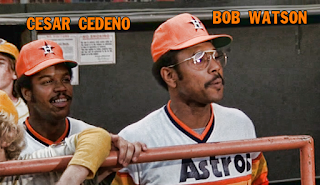 When he fractured his ankle in the 1980 NLCS, he never regained his range in centerfield and the transition into the second half of his career had begun. After years of fan abuse regarding the shooting, Cedeno finally reacted by confronting a fan in the stands in 1981. After 12 seasons, Houston traded him to the Cincinnati Reds for Ray Knight. He played for the Reds, Cardinals and Dodgers before ending his major league career in 1986.

In retirement, there were still several issues that continued to dog Cedeno, even as he tried to continue his time in the game. Most recently, Cedeno returned to the Astros organization as hitting coach for the Greensville Astros. Cedeno set Astros' club records for total bases, slugging percentage and steals in a single season during his Houston tenure.

Why I love this card
Promise. Optimism. That's what I recall when I see this card today. I knew nothing about the shooting in 1980, but I knew that getting a Cedeno card represented something. Whether its the promise of a successfully stolen base, the eye-popping color of the Astros' uniforms or the optimism that eventually Cedeno is going home, this card was different than the standard fare. Even if it meant without his helmet or cap, Cedeno is going home. He will score. And everything will be alright.

Something else...
Cedeno was often included in sub-sets throughout the 1970s: Hostess, Kellogg's etc. Not surprisingly, he, along with Nolan Ryan and J.R. Richard were one of the three players to represent the Astros in the 60 card, 1980 Topps Super Set. It is pictured here 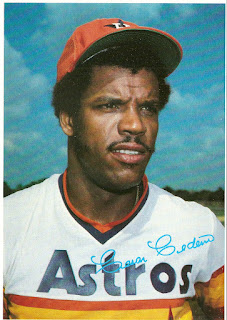 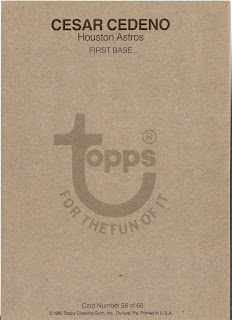 Likewise, Cedeno was included in the 1980 Burger King set. The card is essentially the same photo as the regular issue, only a little tighter shot with some of the background cropped out. 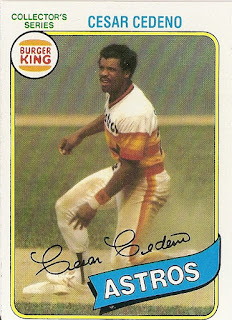 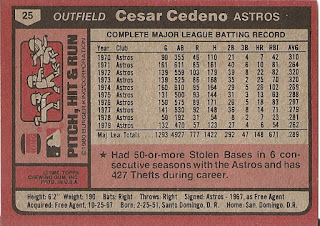