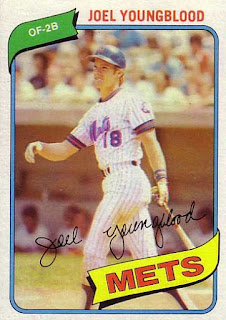 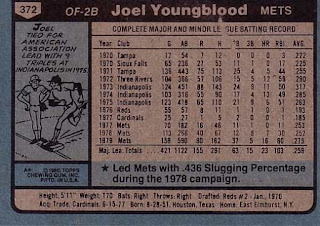 Who is this player,
Joel Youngblood, outfielder, New York Mets

For the first time in his major league career, Joel Youngblood began 1980 with the aspirations of being a regular. After a breakout 1979 season that saw him emerge as one of the bright spots on a bad New York Mets team, Youngblood was being counted on as the regular right-fielder. In fact, Youngblood said that his greatest thrill as a player came in the 1980 opener when he made a great catch against the Chicago Cubs. Video of that catch is below:

Youngblood would play the majority of 1980 in right field, but his versatility eventually saw him moved all across the diamond; in left field, at third base, in center field and at second base. Even when he did not start, the right-hitter fashioned a .538 average (7 for 13) as a pinch-hitter in 1980. Additionally, his 18 outfield assists ranked third in his league.

Since there are numerous, well written bios already on the web about Youngblood, I won't rehash. You can find some of the better ones here  and here.

Joel Youngblood, is of course best known for being the only player in Major League history to collect two hits for two teams in two different cities on the same day. This too, has been very well documented. MLB.com has video of the day's events here, and nearly every article written about him since contains a mention of it.

During his career, Youngblood represented an interesting dichotomy; is it better to be a bit player on a World Championship team, as he was with the 1976 Cincinnati Reds, or an everyday player on one of the worst teams in the league? As it was, Youngblood's ability to do many things well parlayed into a 14-year major league career with the Reds, St. Louis Cardinals, Mets, Montreal Expos and San Francisco Giants.

Youngblood moved on to coach in the majors with the Reds, Brewers and Orioles and managed in the minor leagues during the 1990s. He left baseball for a while to work in sales and returned to baseball earlier this decade as coach with the Arizona Diamondbacks, where today he is a minor league coordinator. A short interview with him last summer is located below.

Why I love this card
Joel Youngblood was named to the 1981 All Star team, primarily due to the fact that he was leading the NL in batting at the time the Player's Strike hit. One of the things that I did during the broadcast was organize all the cards of the players in the game. The only problem was, I did not have a 1981 Youngblood card. The card above had to do as it was the only one that I had and the fact that he was an All-Star, never mind the reason, he was a cut above. Guys who made the All Star teams during this era, remained a cut above in my mind for years to come by the basis of that. Now I know that they shouldn't have, but that didn't matter at the time.

Something else...
Topps 1983 stickers memorialized the Two Hits in a Day thing with a two-part sticker layout. I hated the Youngblood card, because no matter what, the cut on the stickers had to be off as I could never, I mean ever, get the neck in his jersey to line up perfectly. 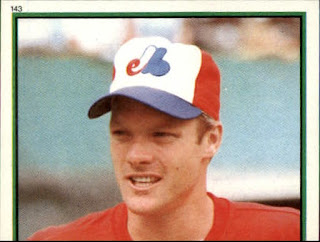 Secondly, this is Youngblood's second appearance on a 1980 Topps Card. His first came on Tim Foli's issue, card #246. Here it is below: 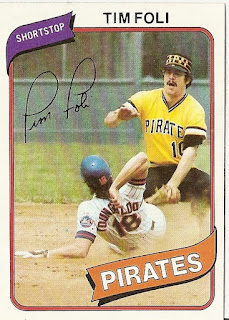