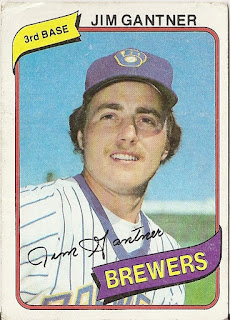 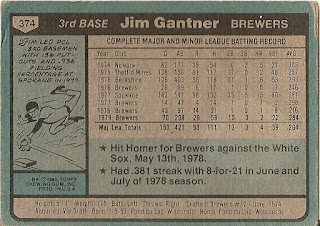 Who is this player?
Jim Gantner, third baseman, Milwaukee Brewers

Although the front of his card indicates Jim Gantner as a third baseman, he started more games in 1980 at second base as he did at third. This was mainly due to an injury to Paul Molitor who missed a month and an half during the summer and the fact that veterans Don Money and Sal Bando could also play third. He put in a very solid season batting .282 and establishing his career-long reputation as a dependable and reliable player regardless of where he was on the field or where he was batting in the lineup.

Perhaps it was fate that the Wisconsin native would spend every day of his 17-year career as a member of the hometown team, with only Hall of Famer Robin Yount spending more time in a Brewer uniform. Growing up in nearby Eden, Gantner starred in high school and in college again choosing a school close to home, the University of Wisconsin-Oshkosh.

He made his major league debut at the end of the 1976 season and was teammates with the immortal Henry Aaron, whom he pinch-ran for in the legend's final game on the final day of the season.

He is fondly remembered as a member of the famed "Harvey's Wallbangers" 1982 American League champions. Appearing mostly as a second baseman, this team is the most beloved in Brewers history as the only team to reach the World Series. He appeared in all seven games of the Fall Classic, batting .333 (8-24) with five extra base hits.

Along with Yount and Paul Molitor, Gantner would share a record for most season three players spent as teammates (15) a streak that would end with Gantner's retirement and Molitor's free agent signing with the Toronto Blue Jays.

In retirement, Gantner coached and managed and was honored by the state of Wisconsin and his college with inductions to their Halls of Fame. He also had a variety of interests; he opened a coffee shop, was instrumental in the revitalization of a downtown Milwaukee hotel and owns a auto-repair business in Hales Corners, Wisconsin.

Recently, Gantner, who had his ACL torn twice with take-out slides, offered his opinion of the recent "Chase Utley rule."

Why I love this card
Guys like Ganter would typically have their minor league records on the back. I loved this since it gave me a glimpse of all the other places baseball was played throughout the country. In 1980, there were no minor league teams in Michigan, so seeing other cities intrigued me.

Some cities, like Newark, I already knew. Others, like Spokane, my dad would help me, often times with an atlas for a visual point of reference. Gantner's card, though provided a conundrum - where in the world was Thetf'd Mines?? It was the only place that my father didn't know or we couldn't find in an atlas. It it wasn't in an atlas, where did Gantner play? Overseas? The Moon? It bugged me the whole summer whenever I came across Gantner's card.

Today, the internet makes everything so easy....Gantner played in Thetford-Mines, Quebec for the appropriately named Miners. Since my dad's atlas was of the United States, no wonder we never found it. Gantner would be on the last MLB-affiliated team to play in that town.

Something else...
Thetford Mines population is roughly 25,000 people and about two and a half hours east of Montreal. Not surprisingly, they have a hockey team interestingly named the Thetford-Mines Isothermic.
Posted by Dean Family at 7:55 PM