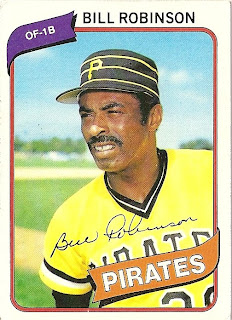 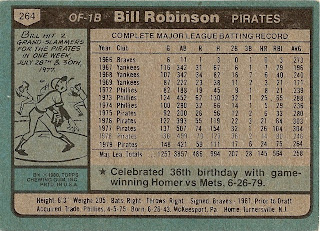 Who is this player?
Bill Robinson, utility player, Pittsburgh Pirates
By the time that this card was making the rounds during the summer of 1980, the 37-year old Bill Robinson had slipped into a part-time role with the Pittsburgh Pirates. Splitting time between first base and the outfield, Bill appeared in the fewest amount of games played in the last five years. He was still potent with the bat however, batting .287 and clubbing 11 home runs. Robinson also achieved a milestone in 1980, by achieiving his 1000th career hit on April 18th against the St. Louis Cardinals.

Born in raised western Pennsylvania, Bill Robinson was touted as the best baseball prospect in the state. As a pitcher, he had not lost a game in four years. He had also been All-State in basketball and received over 50 scholarship offers. The Milwaukee Braves signed him to a $20,000 bonus and the team converted him into an outfielder so he could play everyday. The scout told him frankly that had Robinson been white he might have received $100,000.

After five years in the Braves organization, Robinson was peddled to the New York Yankees. On Opening Day in 1967, Robinson clubbed a towering home run and the press was quick to dub him a "black Mickey Mantle." Understandably, Robinson was unable to fulfill such expectations and it invariably effected his play. He batted .206 in three years in New York and hit only 16 home runs. He did not appear in the major leagues in either the 1970 or 1971 seasons and it appeared that his career may be over.

Now with the Philadelphia Phillies, Robinson received the opportunity he needed to revive his career. He grew confident as a hitter and had a breakout season in 1973 (.288 25 65). He was on the move again, traded home in April 1975 to the Pittsburgh Pirates where he would spend the next eight seasons. With the Pirates, Robinson was a righthanded power threat and one of the cogs of the powerful "Lumber Company." He hit over .300 twice, hit 20+ home runs three times and 100+ RBI once. In 1979, he platooned with John Milner in left field as the Pirates won a World Series Championship. Robinson appeared in all seven games of that Series and was on base when Willie Stargell hit his go-ahead home run in Game 7.

Bill left the Pirates in mid-1982 and returned to the Phillies for the final seasons of his 16-year career. He was almost instantly hired as a coach by the New York Mets and he was their first base coach when the Mets won the World Series in 1986. He held the same position in 2003 when the Florida Marlins similarly won the championship. Bill passed away in July of 2007 in Las Vegas Nevada at the age of 64. He was a minor league hitting coordinator for Los Angeles Dodgers and was in town to meet with the team.

Why I love this card
Robinson looks like he really needs a pair of sunglasses in this photograph. That's not my primary reason for loving this card, though. Like Lance Parrish, Bill Robinson's place of birth is McKeesport, Pennsylvania. McKeesport is also where my Dad was born but he grew up in Clairton and Robinson in Elizabeth. My Dad liked Robinson because he went things without a lot of fanfare or recognition yet still got the job done. In retrospect, my Dad's approach to things is very similar.

Something else....
With the recent passing of Jim Bibby, the 1979 Pirates have five players who have passed away. While that may not seem like a lot, the 1980 World Champion Phillies have had only one player pass away.

On this date in 1980:
The horror movie "Dont Go In The House" was released. If you haven't heard of it, it's probably because the movie was awful. I think Mystery Science Theater did a parody of it. For those so inclined, the trailer can be found here.
Posted by Dean Family at 4:09 PM