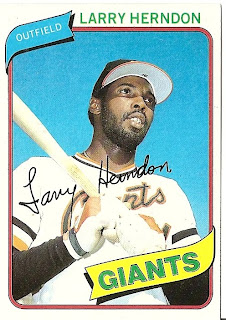 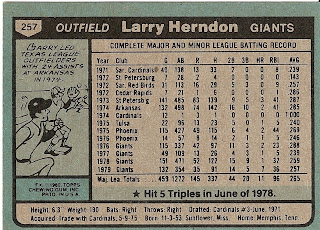 Who is this player?
Larry Herndon, reserve outfielder, San Francisco Giants
The versatile right handed hitting Larry Herndon appeared in 139 games in 1980, primarily as the fourth outfielder. He clubbed a three-run homer on Opening Day but struggled in the early part of the season at the plate. A 12-game hitting streak in July but him back on track and he finished the season with a .258 average and career highs in home runs and runs batted in. On September 6, while playing center field, he committed three errors in the same inning, on three different plays.

Born in the tiny Mississippi town of Sunflower, Herndon grew up in a tight family in Memphis Tennessee. After earning numerous letters as a high school athlete, he was chosen by the St. Louis Cardinals in the third round of the 1971 amateur draft. He rose quickly through the Cardinals system, earning a reputation as a fine defensive outfielder. Larry made his major league debut near the end of the 1974 season, appearing in 12 games and getting a hit in his only at-bat.

Traded to the San Francisco Giants in May, 1976, Herndon responded with a fine season in which he was honored as The Sporting News NL Rookie Player of the Year. As the Giants ' centerfielder in 1976, he hit .288 in 337 at-bats. Herndon would spent six seasons in San Francisco, averaging 114 games a year, but never nailing down a starting position. Despite batting .288 in 1981 and winning a team award for spirit and leadership, the Giants traded to him to the Detroit Tigers on December 9, 1981.

It was in Motown that Herndon would achieve his most notoriety. He tied a major league record in 1982 with home runs in four consecutive at-bats (over two games) and batted .440 in that torrid two-week stretch. As a full-time left fielder, Larry blossomed in Tiger Stadium, clubbing 20+ home runs and batting near .300 in 1982 and 1983. As the Tigers became a serious contender, Herndon was an unsung, yet significant piece of the championship puzzle.

Larry endeared himself to Tiger fans in 1984 when he hit the game-winning home run in Game 1 of the 1984 World Series and caught the final out in Game 5. He did so again in 1987 when his home run off of Jimmy Key on the final day of the season provided the margin of victory at Detroit claimed the AL East. Batting mainly against lefthanded pitching that year, Herndon batted .324 in the regular season and .333 in the postseason. He retired following the 1988 season after 14 years in the major leagues. After a stint in the early 1990s as the Tigers' hitting coach, today he is coaching with the Lakeland Flying Tigers.

Why I love this card
I did not really become aware of this card until Herndon became a Tiger. He looked so different in a Giants uniform. I was never much a fan of these "up the nostril" shots that is here on this card. Then and now, I felt that there was so much more Topps could do when photographing a major league player instead of making him appear like the Jolly Green Giant.

Something else....
Like most in the late 1980s, I was a big WWF fan. On one of the TV shows, Randy "Macho Man" Savage was interviewed for an upcoming card in Detroit and he began saying "Larry Herndon, hello." It blew me away as I couldn't figure out the connection. Turns out, Savage, under his given name Randy Poffo was teammates with Herndon in rookie ball in 1971. Poffo played minor league baseball several years before giving it up and concentrating on wrestling full time. Who knew?

On this date in 1980:
President Carter signed into law the Refugee Act of 1980, which had earlier been approved by the U.S. Senate and House of Representatives. The legislation extended the definition of refugees to include persons from every part of the world and it increased the number of refugees and immigrants allowed to enter the U.S. each year from 290,000 to 320,000. Somewhere Barbaro Garbey smiled.
Posted by Dean Family at 11:51 AM