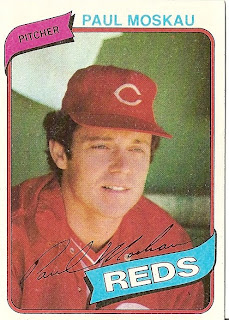 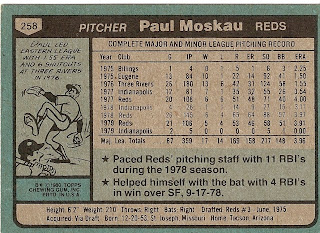 Who is this player?
Paul Moskau, swingman, Cincinnati Reds
With a last name pronounced like the city in Russia, Paul Moskau began the 1980 season in the Cincinnati bullpen. The righthander was coming off of a back injury that caused him to miss much of the previous year. He occasionally started but pitched most of the first half of the season in relief. Moskau was inserted into the rotation in the second half of the season as the fifth starter. A highlight came on August 28th when he pitched a complete game shutout against the first-place Pittsburgh Pirates.

A product of St. Joseph, Missouri, Moskau relocated to Arizona and led his high school team to a state championship. He was a third round selection of the Cincinnati Reds in 1975. In the minor leagues, he was 2-time ERA champion and posted an impressive 13-win season in the Eastern League in 1976. He made his big league debut the following season and was inserted into the Reds rotation in June. He won six games, including shutouts against the Padres and Phillies. Reds' manager Sparky Anderson was a strong supporter and he returned to the starting rotation in 1978.

He won only six games in 25 starts that season, more than likely due to hard luck as the vaunted Big Red Machine began to show signs of age. When Anderson was fired and Moskau missed half of 1979 with a back injury, he had to reclaim his spot in the Reds rotation. Moskau watched from the sidelines as the Reds claimed the 1979 NL West flag, yet lost in the NLCS to Pittsburgh.

Pitching nearly entirely in relief in 1981, Moskau never really found a rhythm and was often used in mop up situations. When the season ended, he was traded to the Baltimore Orioles, but the O's surprisingly released him in Spring Training before ever appearing in a official game. He caught on with the Pirates, who sparingly used him in relief. He caught on with the Cubs for the 1983 season, and made a return to the starting rotation. However, he was not effective in eight appearances and was released after posting a 6.75 ERA. It would be the final season of his seven-year career.

He became the general manager of the Triple-A Tucson Sidewinders and is now an administrator at Fenster School. The Fenster School is a college preparatory boarding high school in Arizona and Moskau serves as the school's director of facilities, security and athletics.

Why I love this card
This was another guy that whose name everyone mispronounced for a while. "Moose-cow," "Moss-Kayo," or "Moss-Kay-U," we tried everything but the correct pronunciation. When we found out how it was supposed to be pronounced, none of us believed it and we settled on "Moose-Cow."

Something else....
Moskau's son played in the minor leagues for a little while and got married in 2002. How do I know this? It's amazing what you can find on the internet. Here is a picture of Paul and his wife at the wedding. Don't get excited, there is nothing controversial.

On this date in 1980:
Mikuni Shimokawa, a Japanese singer and songwriter was born on this day. Don't worry, I don't know who this is either.
Posted by Dean Family at 11:26 PM

Labels: (On this date), Cincinnati Reds