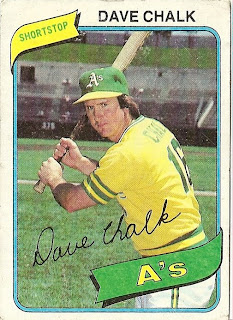 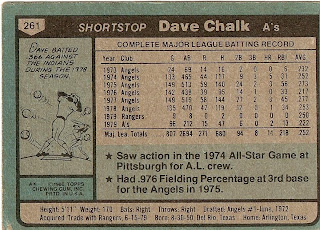 Who is this player?
Dave Chalk, utility, Oakland Athletics
Shortly before the 1980 season was to begin, Dave Chalk signed a free agent contract to become a member of the Kansas City Royals. The righthanded hitting Chalk appeared in 69 games, primarily at third base when George Brett was injured. He also proved to be a useful defensive replacement and reliable in the clutch. His only home run of the year came in a tense game against the Red Sox where Chalk went 3 for 4 with two RBI as the Royals won 9-8. He appeared in the postseason for the only time in his career that fall, in Game 2 of the World Series as Brett was famously suffering his case of hemorrhoids.

A two-time American League All-Star with the California Angels, Dave Chalk was a versatile infielder throughout his major league career. He was originally a third baseman at the University of Texas, where he once hit four home runs in a double header. Selected in the first round by the Angels in 1972, Chalk was moved to second base in the minor league before finally making the Angels as a full-time shortstop in 1974.

An excellent bunter and contact hitter, Chalk excelled in clutch situations. He was moved to third base during his second full season (1975) and for a time was considered one of the better third sackers in the American League. While he never possessed great power, Chalk was known as a reliable fielder and a professional teammate. In 1976, Dave was the last player to have more than 500 plate appearances without a home run nor a stolen base.

A freak injury put him on the disabled list in 1978, and as the Angels began to dip into the free agent market, Chalk was expendable. He was traded to the Rangers for Bert Campaneris in 1979, but spent only six weeks there before being shipped to Oakland for the remainder of the season. Injuries cut into his 1979 season and he was not offered a contract by Oakland. Chalk spent two seasons in Kansas City (1980-81) before ending his nine year major league career.

In retirement, Chalk was honored by the University of Texas by being inducted into the Longhorn Hall of Honor. Today, Chalk's daughter is a senior on the Texas Longhorn softball team.

Why I love this card
Remember these in school when we were kids?

A kid I went to school with, Dave Durecki, had a habit of writing his name everywhere and on everything. He always got in trouble but he still did it. Invariably, this was not uncommon:

Something else....
Chalk had one of those stances that was fun to imitate. Check out his pose on the 1980 card. For a guy known for his bunting ability, is there a better way to photograph him than this? It looks exactly the same way my Dad would hold a rake. Great job Topps.

On this date in 1980:
Archbishop Óscar Romero of El Salvador gives his famous speech appealing to men of the El Salvadoran armed forces to stop killing the Salvadorans. This speech would lead to his assassination while celebrating Mass the following day. He is currently in the process to be canonized as a saint.
Posted by Dean Family at 4:30 PM