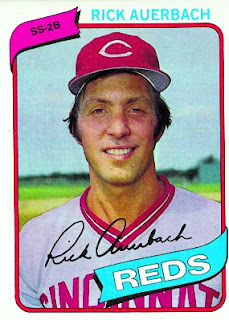 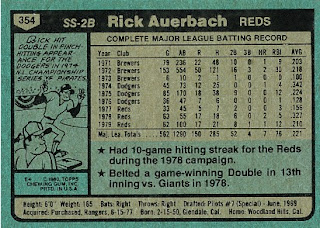 Who is this player?
Rick Auerbach, reserve infielder, Cincinnati Reds
Known initially as a good glove man that was swift on the basepaths, Rick Auerbach had been transitioning into a role as a useful pinch-hitter as the 1980 season began. With the Cincinnati Reds, Auerbach didn't see much playing time, but took advantage of the time he did see, compiling a .333 batting average (11 for 33) by midseason. However, the Reds sold Auerbach to the Texas Rangers shortly after the All-Star break. Rick was in the process of getting married when the transaction was completed and he never reported to the Rangers. Texas placed him on the disqualified list for the remainder of the 1980 season and Auerbach returned home. During the winter, he was involved in an 11-player trade that would send him to the Seattle Mariners.

Rick Auerbach was a native of Woodland Hills, California where he was a prep star at Taft High School (which would boast Robin Yount several years later). Originally drafted by the California Angels out of high school in 1968, Rick instead went to Pierce College and was drafted by the Seattle Pilots the following year. Being an expansion team, Rick rose quickly up the ranks as the Pilots moved to Milwaukee to become the Brewers. His speed was his greatest asset initially and it led him to be invited to the Brewers Spring Training camp in 1971 as a non-roster player. When camp ended, he broke north with the team and found himself in a platoon as Milwaukee's shortstop. By the end of June he was returned to the minors for more seasoning, but it seemed that it would be a matter of time before Auerbach would claim the position as his own.

He did so the following season, winning the shortstop job outright. Appearing in 153 games, he was seventh in the American League in 1972 with 24 stolen bases. However, he batted just .218 and made 30 errors. Shortly after the 1973 season began, he was traded to the Los Angeles Dodgers, where he was primarily a backup for Bill Russell. He would split time between Triple-A and Los Angeles during his tenure (1974-76) but he did appear in the 1974 NLCS and had a pinch-hit double in Game 3 off of Pirates hurler Ramon Hernandez.

Traded to the Mets prior to the 1977 season, he never appeared in a game with the parent club and moved on to Cincinnati in June. He backed up various members of the Big Red Machine and led the National League in pinch hitting in 1978 when he went 7 for 13. He was also one of the few major leaguers of his era to embrace weight training when it was often scorned by major league clubs. In 1979, he had his most at-bats since 1972 in helping the Reds win the NL West championship. Although he batted only .210 he took full advantage of when he was given starting opportunities.

In Seattle for the 1981 season, Auerbach started slowly, batting .155 and his season was ended prematurely, when he was hit by a pitch and broke his right thumb. Although he did not know it at the time, it was the final major league appearance of Auerbach's 11 year career.

More recently, Auerbach has made the news with his bowling exploits in his native California. He took up the game five years ago and his average is about 220.

Why I love this card
Any mention of the Seattle Pilots would garner my attention and there it was on the back of Auerbach's card. I had not discovered "Ball Four" yet, so the Pilots were a mysterious entity to me. Worse, most of the adults I knew could not enlighten me much on the subject either because of the book or because they were not otherwise memorable. For me, though, a card like Auerbach's would begin a life-long curiosity in the Seattle Pilots, of which I am still a sucker for to this day.

Something else....
Apparently, Auerbach's issues with the Texas Rangers were not isolated to 1980. After he was traded to the Rangers from the Mets in 1977, the Rangers sent him to the minors after Auerbach was under the impression he would be signing a major league contract. He refused to report to Triple-A and presumably quit baseball. However, when the Rangers sold him to the Reds, he ended his exile and became a productive pinch hitter.