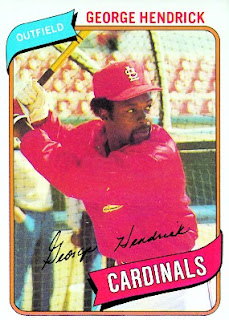 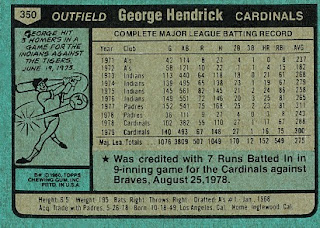 Who is this player?
George Hendrick, right fielder, St. Louis Cardinals
In the midst of perhaps his most productive season, George Hendrick of the St. Louis Cardinals began the 1980 season productively. He had a 6-RBI performance against the defending world champion Pittsburgh Pirates in April and had 50 RBI by early June. He was leading the league in RBI at the All-Star break and this earned him a nod as a reserve in the All-Star Game. His 6th inning single tied the score in the NL's eventual win. George was a reliable bat in the middle of the Cardinals attack and he finished the 1980 season with career highs in base hits (173), home runs (25) and RBI (109). He was rewarded for his performance with the Silver Slugger Award and finished 8th in the NL MVP voting.

A native of Los Angeles, California, George Hendrick was the first player selected in the January 1968 player draft by the Oakland A's. He immediately led the Midwest League in batting his first professional season and was named an All-Star. When he clubbed 21 home runs and batted .333 in just 63 games at Double-A Iowa in 1971, he was promoted to the parent club. He appeared in sporadic duty that first season but was getting invaluable tutelage from teammate Joe Rudi, whom he credited for improving his defense.

Hendrick made the A's roster again the following season but again played sporadically, typically as a fourth outfielder. Oakland meanwhile was on their way to the first of three consecutive world titles. Hendrick scored the eventual game-winning run on a controversial play that has been largely forgotten today.  Despite reaching the pinnacle of a championship, George was disillusioned the following spring when Oakland wanted him to begin the 1973 season in the minor leagues. When he balked at this, he was traded to the Cleveland Indians.

Given an opportunity to play everyday, Hendrick blossomed in Cleveland, becoming the regular centerfielder from 1973-1976. He was one of the team's primary power hitters, hitting three homers in a game and twice was named an All-Star. It was also in Cleveland that he began a long-standing policy of not speaking to the press, who predictably took him to task about it in their writings. George would eventually be called "Captain Easy" or "Joggin' George" as the press fanned the flames regarding his perceived lack of hustle. Despite being one of the best players on the team, these perceptions invariably led to misunderstandings with management and George was traded to the San Diego Padres prior to the 1977 season.

George had a fine 1977 season with the Padres but his reputation hindered him with his owner, Ray Kroc, and he was dealt to the St. Louis Cardinals during the 1978 campaign. It was with the Cardinals that George would establish himself as one of the premier run producers in the game and become a integral member of the eventual 1982 World Series champions. With the Redbirds, George batted over .300 three times, drove in 100 RBI twice was given MVP consideration four consecutive seasons (1980-1983). Even more importantly, he enhanced his reputation as a "team" player as was considered popular among his teammates.

In an effort to bolster their pitching, the Cardinals traded George to the Pittsburgh Pirates in 1985. He would only spend one season in Pittsburgh before moving on to the California Angels for the final four seasons of his 18 year major league career. He appeared in the 1986 ALCS, a seven-game Angel loss.

After his playing days, George Hendrick became a coach with several stops at the minor and major league level. Currently, he is the first base and outfield coach with the Tampa Bay Rays, a position that he has held since 2006.

Why I love this card
As I was learning about the players during the summer of 1980, several words kept popping up regarding George Hendrick. Sullen. Moody. Withdrawn. I didn't get it. Since I was a National League fan, I loved that Hendrick tied the All-Star Game and respected that he drove in runs. By the bunches. Also, the following year, I got this sticker when Topps decided to branch into that collectible: 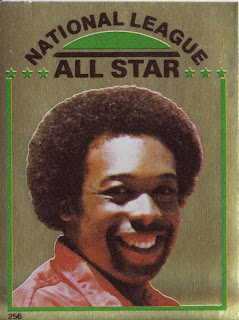 Sullen? Moody? Withdrawn? Who were they kidding? Does Hendrick look any of those things? In my 10-year old mind, they had to be talking about someone else. I sure as heck didn't see it.

Something else....
No post about George Hendrick would be complete with mention of his pant legs. Hendrick is widely credited with being the first player to wear his pant legs very low without the socks showing whatsoever.