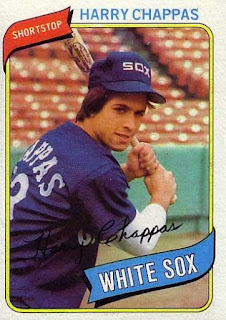 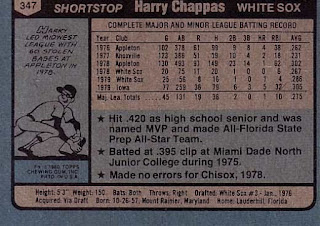 Who is this player?
Harry Chappas, reserve infielder, Chicago White Sox
Although he did not enter the season with as much fanfare as the previous season, Harry Chappas broke north with the Chicago White Sox at the end of Spring Training as an infield reserve. Despite all of the fuss made of his diminutive stature, Chappas was switch-hitting contact hitter whose batting eye and swift feet earned him a spot on the roster. The highlight of his season was a 4-hit performance against the defending AL Champion Baltimore Orioles. However, he managed only three hits in nineteen games after that and was shuttled back and forth to Triple-A. The last time came in June, and it was suggested that Chappas may return since he had an option left that would have prevented him from being placed on waivers. Unfortunately, Chappas did not return to the major leagues and his brief three-year career would come to an end.

Born in Maryland but raised in Florida, Harry Chappas was a prep baseball star as the back of this card indicates. He enrolled in Miami Dade North Junior College, where is performance attracted attention from the White Sox and was drafted in 1976. His early days as a player were described as "aggressive" and "combative"; indeed when a White Sox scout doubted Chappas' ability, he crushed a 425-foot drive.

Chappas had a solid season Single-A Appleton, batting .302 and being named an All-Star. He helped lead the team to 97 wins and in the process earned a ticket to the major leagues. Owner Bill Veeck used the opportunity to play-up Chappas' height. A stunt was created to have broadcaster Harry Caray "measure" Chappas and come in at 5' 3", making hims the shortest player in the majors (Chappas was actually closer to 5' 7'). In his September call-up, he batted .267 for Chicago and handled 92 chances without an error. Appropriately, his first big league hit was a perfect bunt which traveled 30 feet before rolling dead.

The following spring, Chappas made the cover of Sports Illustrated and won the starting shortstop position from Don Kessinger, who was the White Sox' player manager at the time. He struggled mightily the first month and was returned to the minors. When Kessinger was fired and Tony LaRussa took over as manager, Chappas was called back up. He batted .363 upon his return and hitting his only career home run.

Chappas played three more years in the minor league systems of the White Sox and Atlanta Braves before joining an Italian baseball league in 1984. While there, he was involved in a motorcycle accident and crushed his leg. Shortly thereafter, his professional baseball career came to an end.

In the subsequent years, Chappas returned to Florida and entered a vocational program. It was also reported that he had passed courses in precision-parts making and reading blueprints.


Why I love this card
I was oblivious to Chappas' appearance on the cover of Sports Illustrated. I was more transfixed by the cartoon of the base thief on the back of the card, who for some reason, looked suspiciously like the Hamburgler: 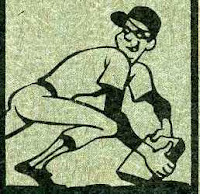 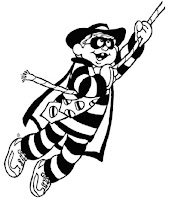 
Something else....
Chappas also had some off-the-field idiosyncrasies. For instance, he raised and bred Australian and African finches, leaving most of them at his Florida home during the season, but keeping some with him. On the road, he also drove roommates to distraction by building model airplanes in his motel room half the night.
Posted by Dean Family at 9:55 PM