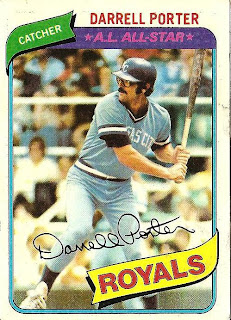 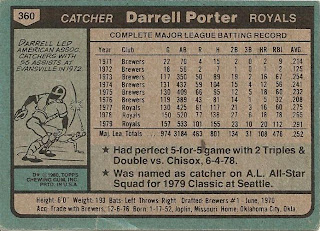 Who is this player?
Darrell Porter, catcher, Kansas City Royals
After posting one of the best offensive seasons by a catcher up to that point, Darrell Porter of the Kansas City Royals shocked the baseball world during Spring Training 1980 when he disclosed substance abuse problem. Initally, only alcohol was cited as a problem, but Porter also acknowledged a cocaine addiction. He spent the next six weeks in a rehabilitation facility and his return to the diamond was seen as an example of his will and courage. However, his performance was effected by the lack of Spring Training, hostile opposing fans and a brief hospitalization. Despite this adversity, he was still able to help the Royals advance to their first World Series in franchise history. When the season ended, Porter followed former manager Whitey Herzog to St. Louis when he signed a large free agent contract with the Cardinals.

A Midwestern boy, Darrell Porter was born in Joplin, Missouri and became a prep star at Southeast High School in Oklahoma City, Oklahoma. A standout on the diamond and the gridiron, Porter received scholarship offers from 40 schools as a football candidate. Blessed with a powerful throwing arm, he initially signed a letter of intent with to quarterback at the University of Oklahoma before deciding on a baseball future. The Milwaukee Brewers made him their first selection of the amateur player draft in June 1970 and offered him a reported $70,000, a large sum for its time. The left-handed hitting Porter homered in his first professional at bat later that summer and was immediately tabbed as a major league prospect.

Darrell made his major league debut the following season and lived up to his billing by crashing a home run against AL MVP and Cy Young Vida Blue. At the time, he was the youngest player in the major leagues. However, he required some more seasoning in the minor leagues before returning to the bigs for good in 1973. That rookie season his .257 batting average and 16 home runs, placed him third in the Rookie of the Year voting and he was named to the American League All-Star team in 1974. However, Porter began to be plagued by the pressure to live up to his advance billing, and this ultimately was a major part of his substance abuse issue. He was traded to the Kansas City Royals following the 1976 season in a curious move, partly because of Brewers' owner Bud Selig decision to rid the team of a potential problem.

Blessed with a new start in Kansas City, Porter's offensive production increased. He was named an All-Star three seasons in a row (1978-1980) and helped the Royals reach the postseason three out of the four seasons he was a Royal. The one season Kansas City didn't reach the playoffs was Porter's finest (1979) which saw Darrell become only the sixth catcher in Major League history drive in and score 100 runs in the same season. He also led the American League with 121 walks and reached base a league-leading 284 times. For good measure, he also placed among league leaders in sacrifice flies, hit by pitches and triples.

While with the Cardinals, Porter was never able to regain his offensive production of 1979, but he was still a solid catcher able to draw walks and get on base. Despite this, he was given a hard time by the St. Louis fans, even as the Cardinals drove towards a postseason appearance in 1982. Porter rewarded them with a scintillating performance in the NLCS, batting .556 (5 for 9) in the Cardinals three game sweep of the Atlanta Braves. He followed that with a similar performance in the World Series against Milwaukee. With several timely hits, including the game-winner in Game 7, Porter was again named the Most Valuable Player. He was also an inspirational figure, often re-telling the story of his addictions and his conversion to a born-again Christian. His autobiography, Snap Me Perfect! was released prior to the 1984 season.

Porter had his best statistical season in St. Louis in 1983 but the Cardinals were unable to return to the postseason. Injuries began to take their toll as he fractured a finger in '83 and suffered a broken collarbone and thumb in 1984. St. Louis returned to the World Series again in 1985, with Porter again having a good NLCS, this time against the Dodgers. However, Darrell and the Cardinals struggled offensively in the World Series against Porter's old team the Royals, and St. Louis came up short in seven games. Porter would spend the final two seasons as a part-time player with the Texas Rangers before retiring after the 1987 season and 17 major league campaigns.

In retirement, Porter, like many of his contemporaries became a broadcaster for a time, was heavily involved in charity world and dabbled in antiques. On August 5, 2002, Porter was found dead in Sugar Creek, Missouri outside of his vehicle. It was initially believed that Porter's car was stuck on a tree stump and the high heat and humidity played a role in his death when he attempted to push the car. An autopsy concluded that he died of "toxic effects of cocaine" consistent with recreational use and induced a condition called excited delirium that caused his heart to stop. He was only 50 years old.

Why I love this card
First, any All-Star card commanded my immediate respect. Something about the All-Star banner that was on these cards elevated the players in my young mind as a future Hall of Famer. Secondly, I was drawn to the fact that Porter went to bat without any batting gloves. For an aspiring Little Leaguer, this was affirmation, especially during a time when batting gloves were becoming the rage. They are pretty standard now at all levels, but back then it was kind of cool to see an All-Star buck the on-coming trend.

Something else...
Porter and Hall of Famer Mickey Cochrane are the only catchers in American League history to draw 100 walks, score 100 runs and drive in 100 RBI in the same season. Porter of course in 1979, Cochrane in 1932. 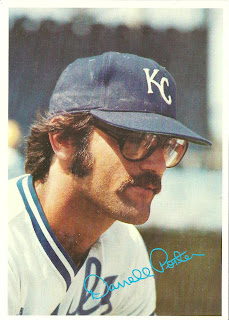 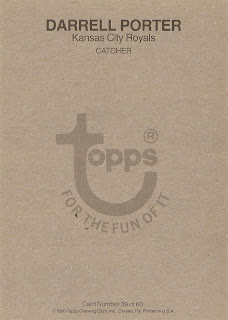