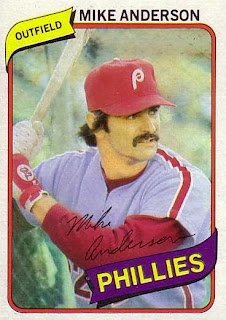 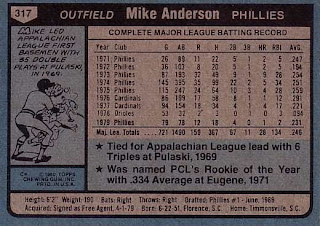 Who is this player?
Mike Anderson, reserve outfielder, Philadelphia Phillies
Shortly before the 1980 season was to begin, Mike Anderson of the Philadelphia Phillies was sent to the minor leagues. This was not a unique occurrence for Anderson, who had been shuttled between the majors and Triple-A for most of his career. This time, however, Anderson did not return to the parent club. Despite hitting .327 in 84 games at Triple-A Oklahoma City, the Phillies did not recall Anderson for the stretch drive late in the season. He would not see major league action again, concluding his nine-year major league career.

Mike Anderson was from an athletic family that was the pride of Timmonsville, South Carolina. His sister was an All-American basketball player and his older brother played baseball in the minor leagues. Mike was a high school football star and signed a letter of intent to play tight end for the University of South Carolina. When the Philadelphia Phillies selected him in the first round of the 1969 draft, he chose a different athletic path.

The righthanded hitting Anderson was a slugging star in the minor leagues and tied a Pacific Coast League record in 1971 by homering in six consecutive games. He was a fearsome batter that combined average with power and his 1971 season numbers were eye popping (.334 36 100, .658 111 runs) and was seen as one of the best prospects in the Phillies organization. In this era, his minor league teammates included Mike Schmidt, Oscar Gamble, Bob Boone and Greg Luzinski and Anderson out shined them all. He was given his first major league look in 1971 and by 1973 was handed the reigns as the team's regular right fielder.

However, for three straight years, his average never rose above .260 and he never reached double-digit figures in home runs. Out of patience, the Phillies traded Anderson to the St. Louis Cardinals for pitcher Ron Reed. Anderson performed well in St. Louis, but was essentially a reserve player. After a poor showing in 1977 he was sold to the Baltimore Orioles and wasn't used often. The Phillies welcomed him back into the fold for the 1979 season and he appeared in 79 games batting .231. The Philies released him in October 1980 shortly after winning the World Series.

Mike was signed by the Pittsburgh Pirates played one more season in the minor leagues (1981) before ending his baseball career. He returned to South Carolina and coached both high school baseball and basketball. His younger brother Kent, followed him to the big leagues, appearing in 135 games over two seasons with the 1989-90 California Angels. Any current information on what Mike is up to these days would be most appreciated.

Why I love this card
I remember debating the cartoon on the back. Was Anderson supposed to be the cartoon fielder in the foreground or the background. It would seem that he would be in the back since it would make the most sense considering the runner. Then again, most of Topps cartoons back in those days usually tried to show the featured player up front. I've said it before, but the things kids argue about sitting on the curb during the lazy days of August, 1980.

Something else....
Much is made of Anderson's 1969 season at Pulaski. His manager that season in Rookie Ball? None other than Dallas Green, the man who would be at the helm in 1980 and the same man that sent Anderson down in the Spring. I always felt sorry for guys like Anderson that play most of their career with a team and then the year they don't, the win the World Series. It was a shame that he couldn't have at least gotten an at bat or something. 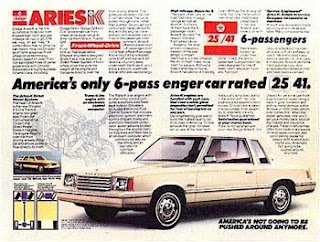 Regardless of your thoughts, these were a staple of the 1980s. On this day, Chrysler chairman Lee Iacocca drove the first one off the assembly line. 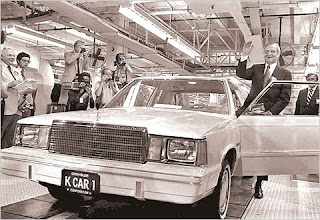 The legacy of these cars is that the helped Chrysler rebound from a disastrous era in the late 1970s to a prosperous time in 1980s. What's that line about those not learning from history?
Posted by Dean Family at 11:25 PM