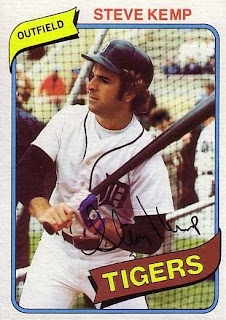 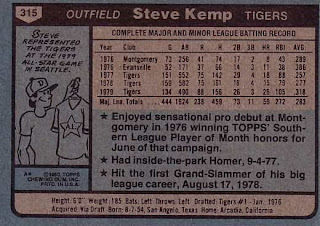 Who is this player?
Steve Kemp, left fielder, Detroit Tigers
As the decade began, Steve Kemp of the Detroit Tigers was generally regarded as one of baseball's future superstars. Coming off of an All-Star season, Kemp engaged in a salary squabble with the Tigers' front office who begrudgingly made him the team's highest paid player through arbitration. Kemp responding with another strong year at the plate, batting .293 with 21 home runs 101 RBI; the first Tiger with consecutive 100+ RBI seasons in more than a decade. As the year came to a close, it appeared that Kemp would be the cornerstone on which the young Tigers would be built.

As part of a long lineage of major league stars off the campus of USC, Steve Kemp was considered one of the best. He hit a record .435 in 1974 en route to a College World Series championship and decided to forgo his senior year and made himself eligible for the baseball draft. He was selected with the first overall pick by the Detroit Tigers, and began a quick ascent to the major leagues. He batted .386 at Triple-A Evansville in 1976, with only an ankle injury preventing his major league debut that season. The following year, Kemp found himself in the Tigers' starting lineup.

The lefthanded hitting Kemp quickly became one of the most feared bats in the Tiger lineup as he averaged 20 HR and 93 RBI the first four seasons of his career. He earned a reputation as a hard nosed player who would play hurt and would do anything to win. However, his time in Detroit was shortened by run-ins with management. After winning arbitration before the 1980 season, he filed again and won again. Frugal Tigers GM Jim Campbell likely began looking to move Kemp before his contract came up, a move made easier by a disappointing performance in 1981. He was traded to the Chicago White Sox in December 1981 for Chet Lemon.

In Chicago, Kemp put together an outstanding season. Playing in a a career-high 160 games, he batted .286 with 98 RBI and scored a career best 91 runs. Chicago was only a one year stop for Kemp, as he signed a huge free agent contract with the New York Yankees. Big things were again predicted for Kemp as a Yankee, but his season was beset by injuries. The first game in a outfield collision in the season's fourth game. He severely injured his shoulder and it effected his performance. A scarier injury came later in the year when he was hit in the face by a line drive in batting practice. While not known at the time, the cumulative effects of these injuries eventually hastened the end of Kemp's career.

After two disappointing seasons with the Yankees, Kemp was traded to the Pittsburgh Pirates in 1985. He played in only 105 games in two seasons with the Bucs and was released. Kemp, however, refused to give up on his major league ambitions and worked in the minors for most of 1986 and all of 1987. He was given a brief 16-game trial by the Texas Rangers in 1988 before in 11-year career came to a close. Today, Kemp is a fixture on many Detroit Tigers' alumni events, including the fantasy camps the club holds every spring in Florida.

Why I love this card
Steve Kemp taught me the bird. May 1980. Probably my third game ever. I didn't know much about autographs then and stood around the third base line with a bunch of other kids trying to get Kemp's signature. Like many around me, I was unsuccessful. Someone yelled to Kemp that he was a bum and he shielded his mitt around his response, an extended middle finger. I returned to my seat and said "Dad, what does this mean?" fully extending my middle finger to probably all of section 138. My Dad, embarrassed, asked where I learned that, and I replied "Steve Kemp." My father just replied with "Steve Kemp is a very very bad man." To be quickly followed by "Don't tell your mother about that."

Something else....
Kemp had a 1980 Super card that was a prize collectible in my neighborhood, despite the middle finger. I fact, I recall a pretty good shoving match in the 7-11 between Ricky Carneghie and Johnny Reshid that ended with the clerk pulling it away from both of them, leaving neither with the prize and thrown out of the store. 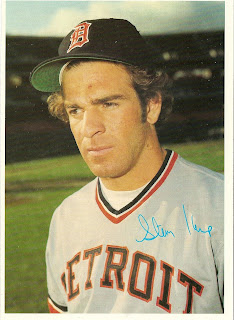 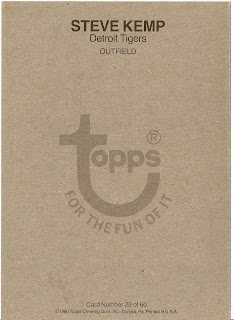