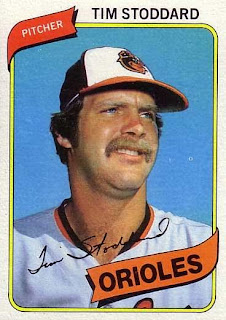 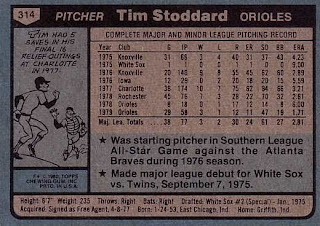 Who is this player?
Tim Stoddard, closer, Baltimore Orioles
Moved into the role of top fireman with the departure of Don Stanhouse, Tim Stoddard responded by pitching in a career-high 64 games and finishing fourth in the American League with 26 saves. The hard throwing righthander was an imposing figure on the mound at 6'7" and 250 pounds. Stoddard was particularly tough down the stretch as the Birds chased the Yankees for the AL East title. In September, Tim appeared in 16 games, saved seven and won two while posting a 2.04 ERA. Unfortunately, Baltimore was not as successful as they finished three games back.

Tim Stoddard is the only man in history to have earned both World Series and NCAA basketball championship rings. At his high school in Indiana, Stoddard excelled on the diamond and the hardwood and his team won a basketball state title. This led him to North Carolina State University where he was the power forward on the 1974 team led by Hall of Famer David Thompson. The Wolfpack went 30-1 that season and stunned the UCLA Bruins and Bill Walton on their way to the title. Meanwhile, Stoddard also lettered in baseball at NC State.

While Tim considered a future in the NBA, the Chicago White Sox drafted him in June, 1974 and his career path took a different road. He made his major league debut within a year, but spent two seasons in the bushes before the White Sox released him. The Orioles quickly scooped him up and he made the majors for good in 1979 as the Orioles went on to become American League champions. In Game 4, Stoddard was the winning pitcher and drove in a run with an eighth-inning single, becoming the first player to drive in a World Series run in his very first at-bat. However, the O's lost the Series in seven games.

After 1980, he shared the Orioles' closer role with Tippy Martinez, but his ERA swelled to 6.09 in 47 games in 1983, the year Baltimore won the World Series. Tim was a member of the team, but did not appear in the postseason. He was traded to the Oakland A's in December and was traded again to the Chicago Cubs in Spring Training 1984. He won 10 games for the Cubs, mainly serving as a setup man to closer Lee Smith Chicago, meanwhile, went on to win the NL East. Stoddard appeared in two games in the NLCS, Games 3 & 4.

Stoddard spent the final five seasons of his 13-year career in San Diego, New York and Cleveland, primarily as a setup man for Rich Gossage, Dave Righetti and Doug Jones. He finished his career with 485 appearances, all in relief. In retirement, Stoddard briefly appeared in two movies; 1988's Big and 1993's Rookie of the Year. Both times he appeared as, predictably, a pitcher. Since 1995, he has been the pitching coach at Northwestern University. One of his more recent pupil's has been J.A. Happ of the Philadelphia Phillies.

Why I love this card
The absence of a background here always sticks out for me. With a guy of Stoddard's physical size, you think that Topps would have photographed him in a way that would emphasize that.

Something else....
If you can click the link above with NC State's 1974 tourney you will see Stoddard as the guy the ball is passed around. If you have never seen how high David Thompson could actually jump, check it out.

On this date in 1980:
USA's Shawn Weatherly crowned 29th Miss Universe in Seoul, South Korea. While this escaped my attention at the time, I would certainly become aware of Shawn Weatherly later on.
Posted by Dean Family at 9:34 AM