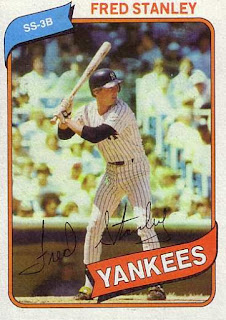 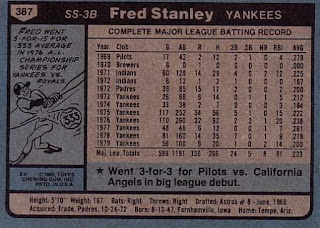 Who is this player?
Fred Stanley, infielder, New York Yankees

Widely known as a defensive specialist, by 1980 Fred Stanley had seen his playing time decrease for the third consecutive year in the Bronx. It was unfortunate timing for Stanley, seeing that incumbent Bucky Dent was out of the lineup due to injuries. Mainly hampered by injuries himself, Stanley saw much of his playing time usurped by both Brian Doyle and Joe Lefebvre. This made Fred expendable and Stanley was not included on the postseason roster of the AL East Champion Yankees. New York was swept by the Kansas City Royals in the ALCS. Before the calendar would turn to 1981, Stanley's time in Gotham was over, as he was traded to the Oakland A's on November 4, 1980.

Today, Fred Stanley is commonly referred to as a "baseball lifer." A respected judge of talent Stanley most recently helped architect the rise of the San Francisco Giants, serving as the director of player development from 2008-2013 and prior to that was the Giants coordinator of minor league instruction. Players such as Buster Posey, Madison Bumgarner, Pablo Sandoval and Tim Lincecum were all under Stanley's watch as the Giants won three World Championships in the past decade. Presently he serves as a special assistant to the Giants.

But prior to his long and successful career developing major league talent, Fred Stanley was a boy from Farhamville, Iowa with major league aspirations. Like most players of this era, Stanley was a high school star, which resulting in a selection by the Houston Astros in the early days of the amateur draft. Houston sold him to the Seattle Pilots in their first and only season, where he made his major league debut in 1969. In time, Stanley would be the last active Seattle Pilot in the major leagues. During this era, the position of shortstop was seen as a defensive one, and anything a player could contribute with the bat was additional, but not primary.

Nicknamed forevermore "Chicken" in the minors due to youthful exuberance of young men, Stanley provided that "good glove," but he was often moved from team to team early in his career, from Seattle to Milwaukee to Cleveland and then to San Diego. To help himself with the bat, Stanley batted from both sides of the plate during the first few years of his career before giving it up and staying a right-handed hitter. When Fred was traded to the New York Yankees prior to the 1973 season, it would begin the longest association in which he is most remembered.

Fred Stanley was present as the Yankees were purchased by George Steinbrenner and began their ascent in the standings. He was present when Billy Martin was named manager and for two seasons, was the everyday shortstop. He was the starter as the Yankees won their first pennant and played in their first World Series in 12 years. Stanley would play a major role that season, batting .238 and finishing as the runner up in his league in fielding at his position. And perhaps unfairly, was singled out by his owner as a primary reason that the Bombers did not win that year. This was the error that ended up costing the Yanks Game Two, but lost to history was Stanley's role in starting the late rally that tied up the game in the first place.


Stanley would spend three more years in the Bronx Zoo, winning two championship rings before following manager Martin to Oakland where he would finish his 14-year major league career. A memorable part of Stanley's A's stint came in 1982, when he was fined over getting picked off second base. It was contended at the time that Stanley did so intentionally to give Rickey Henderson an opportunity to set the single-season stolen base mark in front of the home fans. A picture is below: 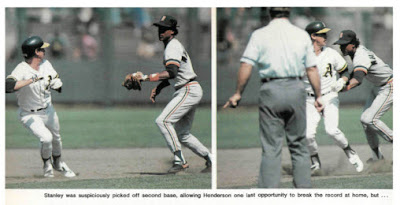 Why I love this card
I knew absolutely nothing about the Seattle Pilots when I first saw the back of this card. Even though it was only 11 years after their only season, it was like discovering life on Mars. Totally mind-blowing. My dad filled in the gaps, although he didn't recall many of the players, except for a certain knuckleball pitcher that once pitched for the Yankees.  It would begin a life-long fascination that I would have with the Pilots, accentuated by Ball Four that I read in high school and a Pilots hat I purchased in Cooperstown in 1989. I still have the book, but wish I still had the hat.

Something else...
An alternate printing of the Stanley card with a yellow hue in his name is one of the few "error" cards from this set. I knew nothing about that at this time either as those cards never filtered down to the plebeians getting their cards from Collie Drugs and Jerry & Goldie's Party Shoppe. If you can find one, it can fetch you a little scratch, but that's about it. A PSA 9 grade of this card (I assume that's good) is currently listed for $1,100 on ebay.  Here's a shot of it: 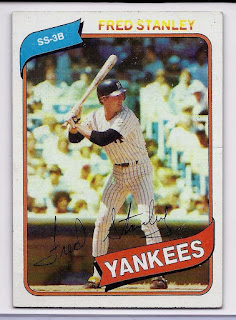